Ten thousand cattle straying,
They quit my range and travell'd away,
And it's “sons-of-guns” is what I say,
I am dead broke, dead broke this day.
Dead broke. 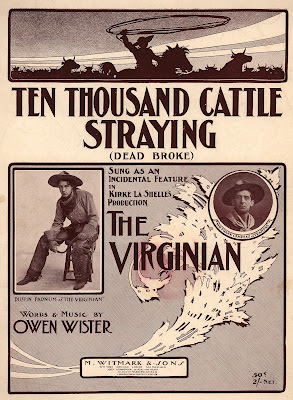 There is some confusion over the exact year in which Owen Wister, the American writer and pioneer of western fiction, wrote and composed the music of Ten Thousand Cattle Straying (Dead Broke) for the stage version of The Virginian, his epoch-making western novel that gave shape to the quintessential cowboy.

If Wister did, indeed, pen the song in 1888, he would have been only 28 years at the time and would have, remarkably, composed it 14 years before he wrote his famous novel, in 1902.

Further reading on the subject revealed that Wister (left) actually wrote the song in 1904, for theatre man Kirke La Shelle’s stage production of The Virginian. It was to be one of the last three successful plays of La Shelle, the other two being The Education of Mr. Pipp and The Heir to the Hoorah. La Shelle died in 1905 at the age of 43.

Ten Thousand Cattle Straying (Dead Broke) was the inspiration for American folk singer and writer Katie Lee’s best-known book Ten Thousand Goddam Cattle, A History of the American Cowboy in Song, Story and Verse, a study of the music, stories, and poetry of the American cowboy. The book, published in 1976, has illustrations by cowboy artist William Moyers and was also recorded as an album.

US actor Dustin Farnum (pictured left in the poster) was cast as the first Virginian in Cecil B. DeMille’s 1914 film adaptation of Wister’s novel. The role was reprised by several actors, most notably Gary Cooper, in the first sound version of the film directed by Victor Fleming in 1929. There have also been a couple of television series based on The Virginian.

John D. Nesbitt, the author and teacher, has written a splendid article on Owen Wister titled "Inventor of the Good-guy Cowboy" and describes him as the creator of “the classic Western hero and the popular western novel.” You can read it here. 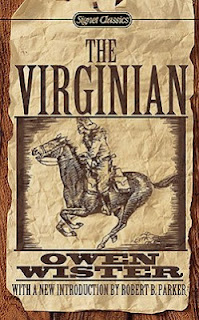 The Western and Cowboy Poetry Music & More at the Bar-D Ranch has carried an interesting article on Owen Wister’s Virginian on its website.
Written by Prashant C. Trikannad at 04:32:00