Twister is my contribution to Tuesday’s Overlooked/Forgotten films and television over at Todd Mason’s blog Sweet Freedom. Don't forget to check out the other fascinating reviews over there. 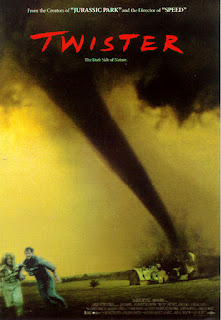 Two of my blog friends, writers Charles Gramlich and F.T. Bradley, are taking evasive action in the wake of Tropical Storm Isaac which is expected to cut through the US Gulf Coast sometime Tuesday. The US National Hurricane Centre in Miami, Florida, warned that Isaac was on the verge of becoming a full-blown hurricane and advised hundreds and thousands of residents from low-lying areas to evacuate to high ground which, the way I see it, could be anywhere.

Evacuation, either due to a natural disaster or a manmade catastrophe, is never easy. It's one thing to pack up a few prized possessions, bundle your family and your pets into a car, and drive away to safety. It’s quite another to live in your temporary accommodation with fear and uncertainty, wondering if the beautiful home you left behind is still going to be there when you go back. This is no vacation.

I hope Charles Gramlich and F.T. Bradley and their families and everyone else in the path of Storm Isaac are safe and sound and there is no recurrence of something even remotely close to Hurricane Katrina.

For Tuesday's Overlooked Films and Television, I write about films and serials I watched over the weekend. While I can recall a face I saw wedged between two boxes of Betty Crocker pancake mix in the grocery section of a packed mall two years ago, I can’t remember everything about a film I watched, say, nine months ago. I usually need a refresher. So, last Saturday, I watched parts of a film I had seen before, Twister, and decided to write about it after reading the storm-related posts by Charles and F.T. Bradley, both published authors.

Before I touch upon this film, however, here’s a question: do hurricanes or typhoons (known as cyclones in the Indian subcontinent) cause tornadoes or twisters? Apparently, when they make landfall, they do.

The computerised twisters in Dutch filmmaker Jan Le Bont’s action-adventure film don’t look as terrifying as they obviously do in real life. There is something surreal about tornadoes, especially multiple tornadoes, particularly those swaying eerily far off at sea and heading for the nearest shore. You know where Spielberg got the idea for his giant alien tripods in War of the Worlds. 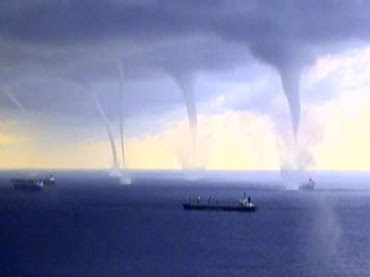 Tornado chasers Dr. Jo Harding (Helen Hunt) and Bill Harding (Bill Paxton) are in the middle of a ridiculous divorce, he chasing her for her stamp of approval on the divorce papers but not really wanting to divorce her, and she chasing twisters that killed her father. Vengeance can be a stormy affair. Caught between Jo and Bill is his new girlfriend Dr. Melissa Reeves (Jami Gertz) whose look throughout the film can only mean two things—“no one loves me, sniff,” or “what the hell am I doing in this place?” I’ll opt for the former.

Accompanying Jo and Bill on their reckless adventure are half-a-dozen fellow researchers and weathermen including the eccentric Dustin Davis, played by the talented Philip Seymour Hoffman who looks older than his age, currently 45, in most of his films (somebody’s got to check out his BC).  Hoffman  has “lost it” in Twister as his loud persona and inane comments fail to evoke laughter. For instance, when a particularly nasty twister gobbles up a truck and throws it right back into the path of his own truck, Davis tells a petrified Melissa in the driver's seat, “Did you just miss that truck? That's awesome!”  Hoffman  was equally obnoxious as Ben Stiller’s sidekick in Along Came Polly which, of course, is not to take away his stellar performance in Capote and Doubt, to name a few. He's got to junk these silly roles. Leave them for Jack Black.

Twister is an average film, entertaining nonetheless. Helen Hunt and Bill Paxton act well though you can’t help thinking the film owes more to Hunt than Paxton. I have never seen a real tornado in my life (they don’t occur in India) though I know that real-life twisters are scarier as hell. The romantic interlude between the couple overshadows the terrifying realities of tornadoes swirling around them. I should know better: this is a romantic drama, not a climate documentary.
Written by Prashant C. Trikannad at 05:37:00