This week Todd Mason is the generous host of Friday’s Forgotten Books in place of Patti Abbott. Check out the entries at his blog Sweet Freedom and the previous FFB posts at Patti’s blog Pattinase.

“By millions of millions the creatures of earth slow and drop when their time-sense is mysteriously paralyzed.”


Dr. Frank Manthis, a brilliant chemical researcher, June Manthis, his lovely daughter, and Jack Baron, a young enterprising radio engineer and protégé of the chemist, are presumably the only people alive in New York and in the rest of the world.

Everyone else is in suspended animation, as it were. Something, or someone, has paralysed their sense of time as they stand rooted where they are or fall to the ground—“like characters from The Sleeping Beauty.”

“There is no doubt of it! Time will come to an end at six o'clock this morning.”

The bespectacled chemist discovers the mysterious phenomenon—of one’s perception of time slowing down before it stands still—while figuring out a chemical formula. He finds that both he and June are affected. 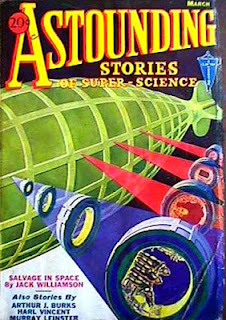 The discovery prompts Dr. Manthis to inject himself, June and Jack Baron with the drug, hashish, by neutralising its deadly effects but retaining its time-expanding effects. Thus, the trio manages to remain normal but is unable to help the people of New York because there’s not enough of the drug and not enough time.

“There's nothing we can do for them now,” he said. “But we must learn all we can. Let’s go down and watch the city die.”

It doesn’t take Dr. Manthis very long to realise that only interference with the thought-waves could paralyse time-sense on such a terrifying scale. He suspects that someone inside or outside the known universe is breaking into the human thought process so as to turn humankind into zombies.

The chemist, the radio engineer and his girl embark on a do-or-die mission to trace the source of the short waves which, they find, is in India and intercept them in a desperate bid to render the waves powerless so as to reawaken the people.

“…if someone is broadcasting such a devilish wave from an earthly station we may have a chance to stop it.”

The task, however, is not easy as the three saviours have to fight a sinister looking Russian, a hashish addict, and end his evil designs to conquer the world. 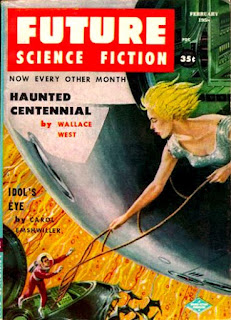 The End of Time is quite a readable story if you overlook the fact that the theme, of time slowing down and stopping altogether, is a fairly common one. Wallace West makes two interesting observations in the story: one is Kant’s axiom that “time is purely subjective” and that “it exists in the mind only” and the other is the reference to ganja, the Indian word for hashish, the users of which “develop homicidal mania” and “run amuck” as they do in India. I quite liked that bit.

The author
American sf writer Wallace West first wrote this story for Astounding Stories, March 1933. He also contributed stories to Weird Tales. West initially wrote short fiction and reworked those into novels, many of which had 'time' as their theme. He also novelised at least four motion pictures and authored some non-fiction as well.

One of his more popular books is The Bird of Time (1959) comprising four of his short stories which had previously appeared in Astounding Stories and Thrilling Wonder Stories. It relates the adventures of Yahna, a Martian bird-woman, and Bill Newsome, an Earthman, and the conflict between their worlds. 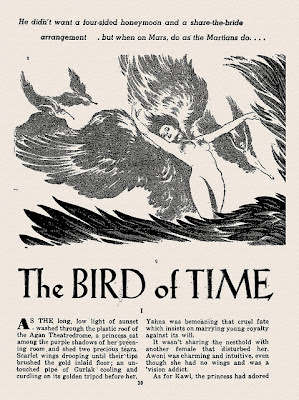 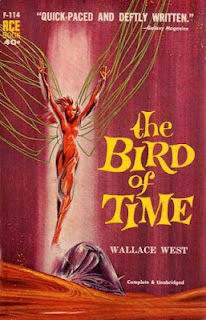 Click this link for a complete list of Wallace West’s books.
Written by Prashant C. Trikannad at 10:22:00