Greed is my contribution to Tuesday’s Overlooked/Forgotten films and television over at Todd Mason’s blog Sweet Freedom. Don't forget to check out the other fascinating reviews over there.

American novelist Frank Norris (left) was only 32 when he died, apparently, of a ruptured appendix. During the course of his young life, however, Norris wrote several novels that mostly depicted the dark and insensitive side of human nature, of greed and corruption and suffering, and their often tragic outcome.

Greed, a black-and-white silent film made by noted actor-director-producer Erich Oswald Stroheim, is one of many and more popular remakes of McTeague: A Story of San Francisco written by Norris in 1899.

Recently, I downloaded this and two other books by Norris, The Octopus: A Story of California and The Pit: A Story of Chicago, and had commenced reading McTeague when I found the movie playing on TCM last Saturday. Unfortunately, I caught only the last half-hour of the film, which isn’t the best way to watch a movie. So admittedly, this cannot be said to be a review of a film I have seen. I also missed watching the rerun later that evening. Nonetheless, Greed is an overlooked film and long forgotten too.

Having read a fairly long synopsis of the ebook, I soon realised that McTeague and Greed were one and the same story even though I have read only the initial few pages of the book and seen only the last part of the film. I must, therefore, depend on IMDb to tell you the story.

McTeague (English actor Gibson Gowland, a big man with thick wavy hair and bushy eyebrows and often cast as a thug) is a dentist in San Francisco. He marries Trina (Zasu Pitts) whose greed for money is matched by her reluctance to spend it. She wins a $5,000 lottery which is what Greed is about. She saves the money and hoards what her husband makes. In walks Marcus (Jean Hersholt, Danish by birth) who is spurned by Trina and avenges his humiliation by exposing McTeague as a dentist without a license. Forced to shut down his practice, McTeague takes up a job as a labourer, and he and Trina move into a dirty rat hole. When McTeague finds out that his wife has been hoarding the money, he kills her and runs away into Death Valley with the bag of gold. Marcus follows him.


“I want that money,” he said, pausing in front of her.
“What money?” cried Trina.
“I want that money. You got it —that five thousand dollars. I want every nickel of it! You understand?”
— From the book, McTeague 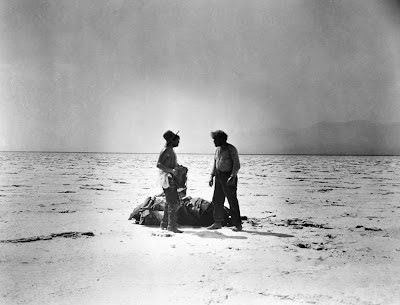 This is where I come in.

McTeague, whom Norris describes as “a young giant, carrying his huge shock of blond hair six feet three inches from the ground,” is riding a well-packed mule through Death Valley, a hot, vast, merciless desert land. Marcus, who is after the bounty, follows him on horseback: he stops every few minutes to look into the blurry horizon and drink the last few drops of water from his canteen. As the scorching sun beats down, his horse collapses and dies. Marcus trudges on foot and soon catches up with McTeague. Gun levelled, he tells the dentist to hand over the gold. As the men argue, the mule bolts with the saddlebag of gold coins. Marcus fires with his revolver and brings down the animal. He also puts a bullet through McTeague’s water canteen. The two men fight and big man McTeague hammers Marcus to death with his own gun. But as he tries to get off the ground, he finds himself handcuffed to the dead man with no key in sight. 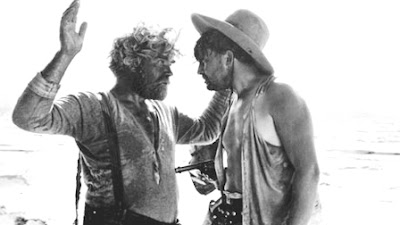 McTeague looks around him, at miles and miles of barren land stretching between him, the dead man, the dead mule, the bullet-riddled canteen, and the torn bag of gold coins, and eternity—a dead man alive.

Greed is a silent film with subtitles. The section of the black-and-white classic that I saw was tinged with yellow, which could have been due to either the blazing sun or a bad print. If there is no speech, there is very little action. The fight scene between McTeague and Marcus, who look like they have been working the sewers, is short but decisive. The dentist’s killing of the suitor is crude, yet convincing. The cinematography, in the final scene, is ordinary as the bone-tired men first make their way through Death Valley and then confront each other in the middle of nowhere. What is extraordinary is Erich Oswald Stroheim’s portrayal of man’s avarice and the lengths he will go to possess wealth. 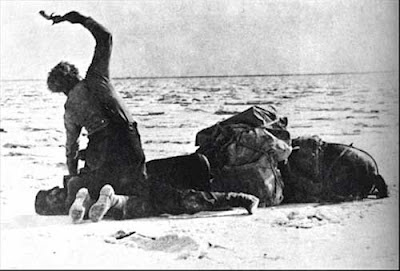