The Doctor, his Wife, and the Clock

This novella is my contribution to Friday’s Forgotten Books meme over at Patti Abbott’s blog Pattinase. Hop over and check out the fine mix of reviews by other book lovers. 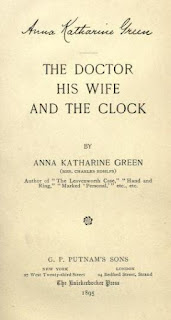 Last evening, I spent a pleasant one hour reading The Doctor, his Wife, and the Clock, a 50-page novella by American poet and novelist Anna Katharine Green who is regarded as one of the earliest writers of detective stories. She introduced her now little-known detective, Inspector Ebenezer Gryce of the New York Metropolitan Police Force, in The Leavenworth Case in 1878, well before his more famous counterparts Sherlock Holmes came to life in A Study in Scarlet (1887) and Hercule Poirot made his debut in The Mysterious Affair at Styles (1920).

In The Doctor, his Wife, and the Clock, which I read as an ebook on my desktop, Ebenezer Gryce is a young, energetic and determined police detective who is entrusted with the investigation of the high-profile murder of Mr. Hasbrouck, a wealthy and influential resident of the Colonnade in Lafayette Place. The murder creates a stir in the neighbourhood as men and women peer out of their windows and doorways and gather in small groups to talk about the crime and who might have committed it. 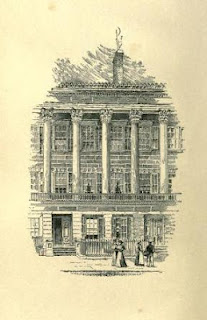 After his customary interrogation of Mr. Hasbrouck’s family, consisting of his wife and three servants, Ebenezer Gryce steps out onto the balcony and looks at the people gathered below, when he spots an attractive woman holding on to her husband who matches her good looks. The seemingly devout couple, he discovers, are Doctor Constant Zabriskie, a blind but highly skilled doctor, and his wife, the very graceful Helen Zabriskie. He also finds out that Hasbrouck and Zabriskie were not just neighbours but also esteemed friends.

Inspector Ebenezer Gryce’s investigations lead him to the house of the Zabriskies where he meets Helen, apprehensive in her bearing, and Constant, who is so agitated as to confess outright that it was he who killed his dear old friend. The dutiful wife, in a desperate effort to save her husband, pronounces his confession as the rambling of a blind man with an unsettled mind. She insists that her husband is hallucinating and is taking responsibility for Mr. Hasbrouck’s unaccountable death. The doctor is equally adamant and implores the inspector to take him in rather than be certified as a mad man.

“No, no, it is false! I will never believe that your hands have been plunged in blood. You are my own pure-hearted Constant, cold, perhaps, and stern, but with no guilt upon your conscience, save in your own wild imagination.”

Stricken by guilt, Doctor Zabriskie makes an unexpected offer to Inspector Gryce and his superiors at the New York Metropolitan Police Force, a proposition that causes further anguish to Helen, even as experts judge him insane and incapable of shooting anyone. To prove his sharp skills with a pistol, even in his blind condition, and show that he is as sane as the rest of them, the doctor offers to shoot at a clock no sooner it strikes five.

“Can you shoot a man dead without seeing him?” asked the Superintendent, with painful effort.

“Give me a pistol and I will show you,” was the quick reply.

The blind doctor hears the clock go off, turns and fires, except it’s the wrong clock, held by his wife and set to go off a full minute before the one he was supposed to fire at, to prove his sanity and his capability with a gun. Helen dies on the spot but not before telling her husband that she could never have survived the proof that he had, unwittingly, killed Mr. Hasbrouck. 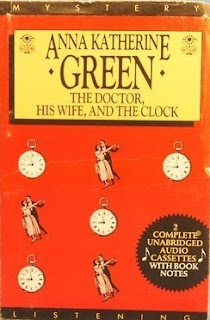 Inspector Ebenezer Gryce suspected the truth behind the murder long before this tragic turn of events. Doctor Zabriskie, it seems, loved his wife deeply but was also insanely jealous. Suspecting Helen of having an affair, he returns home one night with the explicit purpose of shooting her mysterious lover. In spite of his blindness, the doctor never misses his doorstep but that night he does and stops at the next door…that of Mr. Hasbrouck.

“Am I not correct in my surmises, Dr. Zabriskie, and is not this the true explanation of your crime?”

With a strange look, he lifted up his face. “Hush!” said he, “You will awaken her. See how peacefully she sleeps! I should not like to have her awakened now, she is so tired, and I…I have not watched over her as I should.”

This may seem like one spoiler too many but there is more to this fascinating story.

The Doctor, his Wife, and the Clock is only the first of forty books by Anna Katharine Green I have read and I am already willing to certify that she is the original queen of detective fiction. She tells a captivating story in a simple and lucid style even as she astounds the reader with her rich and flawless narrative. There is an old charm to her writing reminiscent of the period she lived and wrote in. 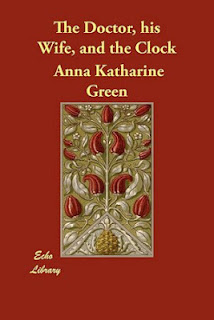 Green has an uncanny eye for detail, particularly legalese, which she may have inherited from her father, a defence lawyer from Brooklyn, New York. Her characters, though just three in number, have depth and are entirely convincing. For instance, Green’s characterisation of the blind and intelligent doctor, Constant Zabriskie, and his lovely wife Helen Zabriskie is so real they seem to come alive through the pages, as if you were watching them play out their emotional drama on screen.

Inspector Ebenezer Gryce, on the other hand, is an excellent specimen of a detective who, I have no doubt, influenced fictional sleuths of the future. He is a clever and calm-headed detective who holds on to the case till he has solved it. He goes about solving Mr. Hasbrouck’s murder with precision and in the absence of clues because there aren’t any. The mystery unfolds as you read. He is described as “eccentric” though I did not find him peculiar in any way. In fact, Gryce is portrayed as sensitive and considerate, especially towards Helen for whom he has a deep admiration. He sympathises with her plight and tells her, rather quietly, that he is her friend. This is his story and he recounts it as a spectator in spite of being at the heart of the mystery.

The Doctor, his Wife, and the Clock is a superb piece of fiction by Anna Katharine Green and one of the best short novels I have read in recent times. I intend to read her other books most of which are available online legally.
Written by Prashant C. Trikannad at 22:32:00