The Continental Classics, Volume XIV, and

The Vampire by Jan Neruda

These two literary works are my contribution to this Friday’s Forgotten Books edition over at Patti Abbott’s blog Pattinase. Don’t forget to read the fine mix of reviews of forgotten books by other bloggers over there.

“There is but one vast treasure-house of Eastern lore, and from its miraculous riches every bard and rhymer, every recounter of things marvelous and glad and sad, has drawn to his heart's content since the days of Babylon. No one can say how old these stories are. They are primeval. Some of them are as old as man. Some of them go back to those days when kindly spirits walked the earth among mortals, wondering gently at the new creature, with his fancies and his whims, and now and then touching man's work to unravel some knot of fate or to bring an unexpected blessing to some simple, good person. Of these tales of fairyland and its ministering visitants there is a web all round the world, and every wise child should believe them until he grows old and hard and incredulous.”
— Charles Johnston in his introduction to the section on Oriental Mystery Stories in The Continental Classics, Volume XIV.

Some of the world's best-known, and untold, stories are found in literary compendiums such as the twenty-volume The Continental Classics and the ten-volume The Best of the World's Classics. Written and translated in lucid prose, the stories cut across peoples and countries and races and continents, and cover nearly every literary category there is — from mystery and adventure, fantasy and horror, romance and satire to tragedy and philosophy.

Many of these folktales and fairytales are undated and have been passed down the centuries for readers like you and me to savour and want more.

One example of the wide and varied reach of literary anthologies is The Continental Classics, Volume XIV, Spanish, Italian and Oriental Tales, a 370-page assorted collection of early mystery stories from Europe and Asia. 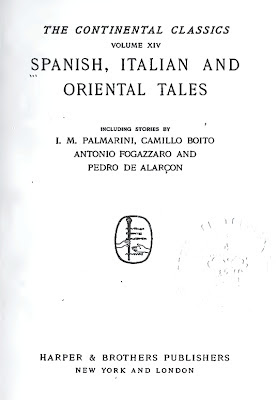 The Spanish and Italian section includes stories by Italo Mario Palmarini, Camillo Boito, Antonio Fogazzaro, and Pedro de Alarcón among others. I have been reading about these unheard-of writers on the internet.

For instance, Camillo Boito (1836-1914) was an Italian architect and engineer, first and foremost. He was also an art critic and historian, and a novelist. He wrote many short stories that included a psychological thriller titled A Christmas Eve, “a tale of incestuous obsession and necrophilia” which is apparently similar to Berenice by Edgar Allan Poe. In 1882, he came out with his most famous work, Senso, a short novel about  “sexual decadence.” A few of his tales have been shot into film.

Coming back to The Continental Classics, Volume XIV, I was delighted to discover five traditional Sanskrit tales that included ‘The Brahman Who Lost His Treasure’ from a book called the Ocean of the Rivers of Stories, written some eight centuries ago. It tells the story of King Prasenajit of Sravasti who helps a miser recover his stolen wealth. The rich merchants of the place bestow all kinds of presents on the man they think is a virtuous Brahman (belonging to the highest of the four social classes of India). He hides his treasure at the foot of the medicinal nagabala tree till one day he finds that it has been stolen. Distraught over losing his wealth, the man decides to commit suicide. The king comes to his rescue by nailing the culprit who had used the roots of the tree to cure his headaches.

Most Indian stories of old times are philosophical in nature. When the merchants learn that the miser is going to starve himself to death, one of them says, “Brahman, why do you long to die for the loss of your wealth? Wealth, like an unseasonable cloud, suddenly comes and goes.”

I am reproducing below the table of contents to give you a fair idea of the kind of stories you can expect in The Continental Classics, Volume XIV. You’ll find this and most of the other volumes at Project Gutenberg.

Lucius Apuleius —
The Adventure of the Three Robbers

Pliny, the Younger —
Letter to Sura

Scroll down for The Vampire by Jan Neruda or click here.
Written by Prashant C. Trikannad at 04:36:00