The following review of Scram! is part of Tuesday’s Overlooked/Forgotten films over at Todd Mason’s blog Sweet Freedom where you can check out lots of exciting film and television reviews.

Judge: If the jail wasn't full, I'd give you both 180 days, but since the jail is full, I'm going to give you just one hour.
Oliver Hardy: Thank you, sir.
Judge: To get out of town! And never let me set eyes on you again! Case dismissed.
Stan Laurel: Does that mean we can go back to sleeping on the park bench?

Laurel delivers this gem of a line in all innocence. While the judge’s harsh pronouncement ricochets off Laurel’s affable face, the enormity of the situation is not lost on friend Hardy, who is equally innocent but slightly cleverer of the two.

The two lovable vagrants are hauled up before Judge Beaumont (Richard Cramer), a mean judge with a screwed up face, who orders them to get out of town in one hour.

Judge: Scram! Or I'll build a jail for you.

As the homeless duo make their way through rain on a cold night, they come across a drunk in tuxedo (Arthur Housman) who is looking for his car keys. Laurel and Hardy, ever willing to lend a hand, help the drunk retrieve his keys. The search for the elusive keys is not without the usual share of slapstick comedy and a cop is thrown in for good measure. There’s always one or two lurking around the pair.

Oliver Hardy: What's the matter, neighbour?
Drunk: I los' the key to my car.
Stanley Laurel: Can you find it?
Drunk: No, thas' why I'm lookin'...

The drunk returns the favour by inviting the boys over to his house, except he takes them to the wrong house. You guessed it! The poor chaps land up in the angry judge’s home where his wife (Vivien Oakland) faints at the sight of Laurel and Hardy. The unsuspecting pair revive Mrs. Beaumont with a glass of water from a pitcher, except it turns out to be gin (the handiwork of the drunk who has quietly stumbled his way out of the house).

Now the poor fellas have a very drunk judge’s wife on their hands. Although Laurel and Hardy don’t know who her husband is, they are aware of the delicate situation and, in desperation, try putting her to sleep. Not one to quieten down easily, Mrs. Beaumont plays music and insists on dancing with the boys who by now are too frightened to even think of their fate should her husband walk in.

At last, the judge’s wife plops on her bed with Laurel and Hardy on either side. Just as they think it’s the end of their troubles, Mrs. Beaumont explodes into inexplicable fits of laughter that’s so infectious that it catches Laurel and Hardy too. The comic duo laugh their guts out until suddenly, as they are about to have another bout of laugh, they see Judge Beaumont standing in the doorway, a dirty scowl on his face and a gun in his hand. One after the other, they swallow hard – gulp! The judge raises his hand and fires… 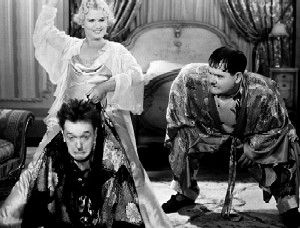 You don’t mind what happens in the end because, by then, you’re rolling with laughter too.

Produced by Hal Roach and directed by Raymond McCarey, Scram! is exactly as the title suggests. But Laurel and Hardy don’t scram out of town. Instead, they stay put without realising the consequences of their action. Blame it on their innocence which, as I have said before, is what Laurel and Hardy is all about. Here are two amiable and happy-go-lucky fellas whose optimistic view of life, in spite of being perennially broke, hungry and homeless, never changes. The world according to Laurel and Hardy is a world you would do well to live by. 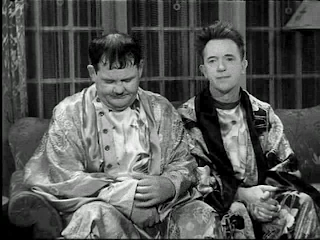