The Spanish Gardener by A.J. Cronin

While I haven't read all seventeen novels by Archibald Joseph Cronin, known as A.J. Cronin, the Scottish physician and prolific writer, among the ones I have read Beyond This Place, The Citadel, Hatter's Castle, Grand Canary and Shannon's Way are my favourites.
My first A.J. Cronin novel was Beyond This Place which I read soon after high school. I was deeply impressed by the good physician's writing style and story-telling, simple and lucid. In this novel, written in 1953, Paul Mathry, a young student, goes in search of his father who is wrongly convicted for murder.

Cronin wrote about the middle-class and for the middle-class. His stories were poignant and captured the pathos of daily life, in situations and surroundings familiar to us. Most of his novels were about love and relationships, and reflected the importance he attached to families and family life.

Towards the end of last year, I read the 157-page The Spanish Gardener (1950) where Cronin introduces you to one of his most intense, and unforgettable, characters — Harrington Brande — a proud British diplomat posted somewhere in Spain. After his wife walks out of their marriage, Brande becomes possessive about his son, Nicholas, who he brings up in a closed environment, away from the influences of the outside world. Brande is so insanely jealous about his son's love for him that he destroys the innocent friendship between Nicholas and Jose, the charismatic gardener, who is framed for theft and dies in the end.

The Spanish Gardener, which was made into a film in 1956, starring Dick Bogarde as Jose, is the story of a man whose love destroyed everything it touched. When his wife tells him that she wants a separation, Brande hits back, "If you go, I'll never take you back... You'll have no money, no position, nothing. And you'll have no hand, none, in bringing up our child."

The story revolves mainly around the struggle between father and son. In the end the son tells his father that he wishes to see his mother and stay with her. "...there is no doubt I should spend some time with mother. That is only fair...to all of us," Nicholas, matured by years, says quietly, as his father listens, stunned and speechless. Brande, who evokes pity and loathing at the same time, knows he has lost again.

Cronin was one of the most popular storytellers of his time, and many of his novels were made into successful films. 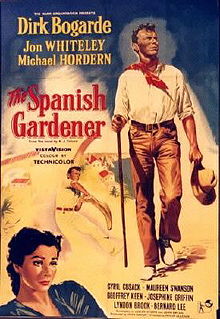