This film is a part of Tuesday’s Overlooked/Forgotten films over at Todd Mason’s blog Sweet Freedom where you can check out many film and television reviews by other enterprising bloggers.

A little research at IMDb (where else?) tells me that American actress, singer and dancer Jane Wyman was “the first actor since the silent era to win an Oscar without uttering a word.” 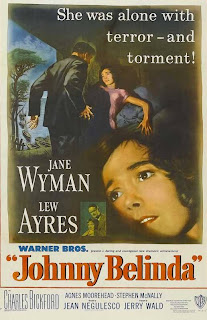 She didn’t say much either in her acceptance speech after winning the statuette for Best Actress for her role as a deaf-and-mute woman in Johnny Belinda. “I won this award by keeping my mouth shut and I think I’ll do it again,” was all Wyman said.

Johnny Belinda, a black-and-white film directed by Jean Negulesco, is the touching story of Belinda McDonald (Jane Wyman), a young deaf-and-mute girl who lives on a small farm with her father Black McDonald (Charles Bickford) and aunt Aggie McDonald (Agnes Moorehead). She assists her burly father in working the mill on the farm. Neither her father and aunt nor the local people from the neighbouring fishing village treat Belinda well — they think she’s too dumb to deserve attention, or affection, of any kind.

Enter Dr. Robert Richardson (Lew Ayres), a young and kind-hearted doctor who feels for the poor, hapless girl and at once realises the potential hidden deep within her. When the doctor asks her father if he can teach his daughter, McDonald is not convinced but agrees to the request because he has nothing to lose, one way or the other. Dr. Richardson teaches Belinda how to identify objects, greet people, and make small talk through sign language and lip-reading, much to the delight and surprise of McDonald who begins to look at his little girl in a new light.


As Robert makes steady progress with Belinda’s tutoring, a bond of friendship and mutual respect develops between the two, though you suspect the doctor’s in love with her. The girl looks forward to the doctor’s frequent visits and in his absence practices what he has taught her, with a smile gracing her sweet face.

Just as Belinda starts to come out of her shell, trouble arrives in the form of Locky McCormick (Stephen McNally), a local brute who does business with her father and has an eye for women. After a particular night of revelry in the village, McCormick arrives at the MacDonald farm, drunk and wild with lust, and rapes Belinda. Nobody is at home.


Upon his return from a trip to the city, Robert finds Belinda reclusive but her father has no explanation for her sudden regression. When Robert takes the girl to the city for a medical check-up, to improve her general condition, he discovers that she is pregnant.

The village of rumour and gossip mongers adds to Belinda and Robert’s misery by blaming the doctor for the girl’s pregnancy. Troubled by the false accusations, Dr. Richardson decides to leave the village, leaving Belinda grief-stricken. As time passes, Belinda delivers a healthy baby but the doting mother’s problems are far from over: McCormick, who marries the doctor’s secretary Stella (Jan Sterling), returns to the farm to snatch “his” baby from Belinda, who has no choice but to kill him as he tries to force his way past her.

Belinda is arrested and put on trial but Robert returns to defend her in court and all’s well in the end.


According to an article at Wikipedia, Johnny Belinda, which is based on the play of the same name by Elmer Blaney Harris, reflects the true story of Lydia Dingwell of Dingwells Mills, Prince Edward Island, Canada, and the events occurred close to Harris’s residence.

Director Jean Negulesco handles several delicate issues — the helpless condition of a deaf-and-mute woman, her horrifying rape and eventual pregnancy, the killing of the rapist, and the final court scene — with a great deal of sensitivity. He ensures that Belinda holds on to her sense of dignity throughout the film. There is no explicitness and even the scene where McCormick confronts Belinda in the dimly-lit farmhouse is only suggestive of rape.

Jane Wyman is superb as the deaf-and-mute Belinda McDonald while Lew Ayres, as the soft-spoken and mild-mannered Dr. Robert Richardson, her mentor, puts in a fine performance. As long as he’s there, you know Belinda is safe. 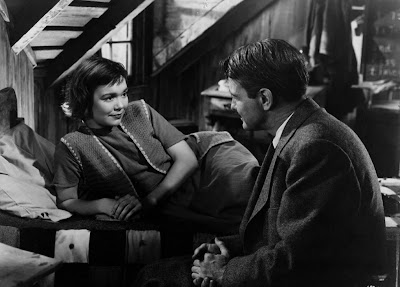