This film is my small contribution to Tuesday’s Overlooked/Forgotten films at Todd Mason’s blog Sweet Freedom where you will find an eclectic mix of film and television reviews by some very fine writers.

A couple of days ago, the family was watching Music and Lyrics (2007) on cable when Drew Barrymore, who stars opposite Hugh Grant in this delightful romantic musical, got me thinking about her most famous role as a child actor — Gertie in E.T.: The Extra-Terrestrial (1982). She was only seven then. Although Barrymore made her debut with Altered States (1980), which I haven't seen, there was one other film where she created a stir as a little girl — Irreconcilable Differences (1984). 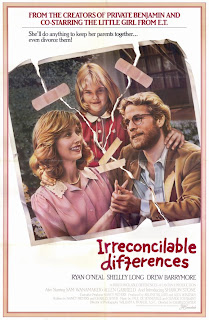 I saw this film in the mid-eighties inside a sprawling auditorium called Akashvani (Voice of the Sky), officially known as All India Radio or AIR, the government-run radio broadcast service and currently a division of Prasar Bharati (Broadcasting Corporation of India). It closed down many years ago.

The preview theatre, located in the traditional central business district of Bombay, screened little-known films that nobody went to. I used to go there often because tickets and popcorn were cheap and there was so much legroom that you slid down your seat. I saw many reasonably good films at Akashvani. For instance, there was this light-hearted movie called Tug of Love about a father and son who vie for the affections of the same woman. While she's a little old for the son, she's not too young for the father. She settles for the old man in the end. I recall this film to this day because of a melodic song in the film that went "How can I believe everything you say?" I don't know the rest of it.

Frankly, I don't remember much about Irreconcilable Differences either and have only a vague recollection of certain scenes in the movie, like the part where Casey Brodsky (Drew Barrymore) is walking down a corridor toward the courtroom (I presume) with her frantic parents Albert Brodsky (Ryan O'Neal) and Lucy Van Patten Brodsky (Shelley Long) on one hand and half-crazed reporters on the other in pursuit. The young girl is divorcing her career-minded parents because they are fighting all the time and they have no time for her.


I am not sure if the film, directed by Charles Shyer, did well at the box office or was talked about much in the entertainment press. The only media that went after it was the one in the movie, for Casey’s parents, Albert and Lucy, are celebrities, he a teacher and she a writer. They fall in love, marry, have a baby, and drift apart, till their daughter decides she’s had enough of their selfish disposition.

As Casey tells her mum: “Mother, you and dad for a long time did not recognise my rights as a human being. You both treated me like chattel (I'd to look up that word!). You cannot do with me as you please anymore. We have irreconcilable differences.”


The irreconcilable differences are reconciled in the end and Casey Brodsky wins back her parents.

Irreconcilable Differences was an engaging film with the young handsome pair of Ryan O’Neal and Shelley Long playing their parts well. The film also stars Sharon Stone but I don’t remember her part. In fact, I didn’t even know she had acted in the film till I crosschecked the cast. I plead irreconcilable ignorance.
Written by Prashant C. Trikannad at 10:53:00