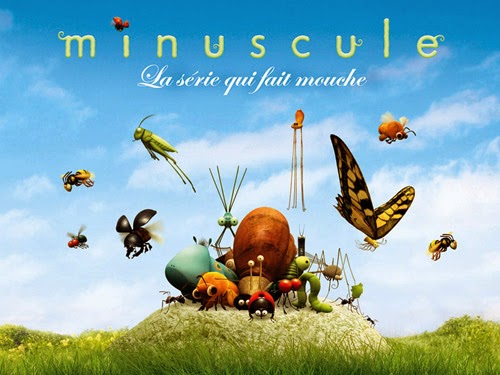 After a hiatus of a couple of years, I returned to the cartoon channels. For the past few days I've been watching Ultimate Spider-Man, the American animation series on Disney XD, and Minuscule, a French animation series on the private and delightful life of insects, on Nick Jr.

I've only seen three episodes of Minuscule and I loved it, mainly because there are no humans (though they appear on the periphery) and no dialogues. Just a bunch of colourful insects whose insignificant and mundane existence is occasionally roused by situations often beyond their control.

The insects are anthropomorphic. They display human characteristics through behaviour, intelligence, and quick thinking. They have big eyes but no expressions. You can sense their emotions that vary from being happy to being sad and from being brave to being scared, though it all comes out in their actions. That’s how I saw it.

In one episode, a farmer is driving his tractor toward an anthill. The ants are terrified. A ladybug, one of the main characters, comes to the rescue. She does what a human would do: she yanks out the tube from the engine and stops the tractor. The farmer climbs down and goes off to find help. The ladybug then refits the tube, turns on the ignition, puts the tractor into reverse gear, and sends it off backward. 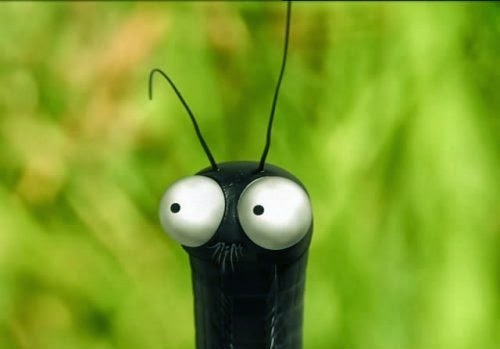 In another episode, a centipede is delighted to find a packet of chips left by a picnicker but is soon disappointed when a couple of wasps dive in like fighter jets, with sound effects and all, and make off with the packet. The ladybug, who is watching from a tree, chases the wasps and in a brief tug of war in the skies succeeds in retrieving it for the arthropod. Together, they sit on a rock and nibble at the chips.

Each colourful episode is very short and usually features no more than one or two insects, most commonly ladybugs, grasshoppers, flies, ants, spiders, and snails. Other not so regular insects include mosquitoes, butterflies, caterpillars, dung beetles, dragonflies, cicadas, bees, and wasps.

There are friends and foes among the tiny creatures. The setting is rural France and very scenic. A piece on Wikipedia describes the French animation series as giving "a bird's eye view of insects' day to day existence, distorted through a burlesque, yet poetic lens."

If Minuscule has a moral behind it, then it is about mutual dependence; and big or small, size has nothing to do with it. I've only seen three episodes, so obviously there’s a lot more to this series, running since 2006. I believe there is a full-length movie too. If you like anthropomorphic serials like Shaun the Sheep, then you’ll enjoy Minuscule whose tiny characters are creepy but cute…well, sort of.