Archie: To Riverdale and Back Again, 1990

For Overlooked Films at Todd Mason’s blog Sweet Freedom, this Tuesday, a very hazy recollection of a film that was best left inside the comic. 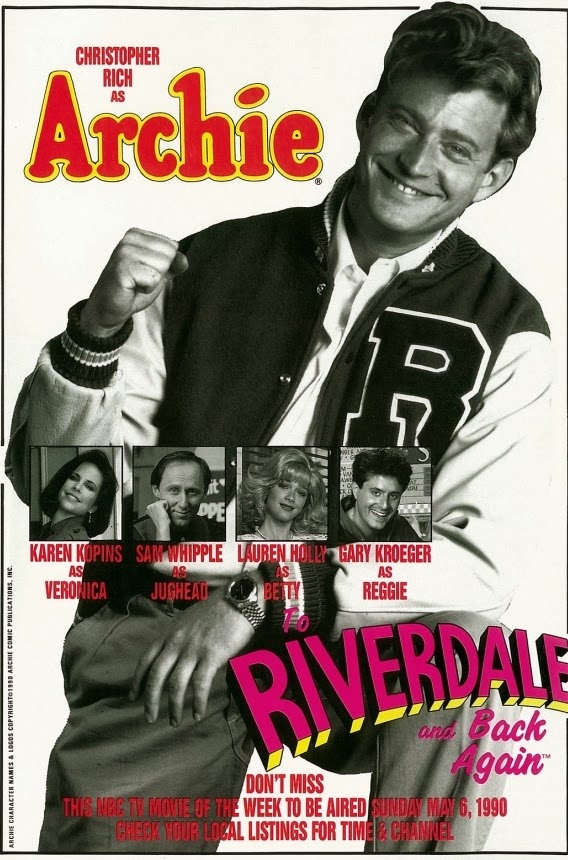 I have only the vaguest of memories of Archie: To Riverdale and Back Again, 1990, based on the popular teenage icon Archie and his friends. They return to good old Riverdale High for a grand reunion. Unlike in the comics, Archie and the gang—Betty, Veronica, Jughead, and Reggie—are all grown up, their teenage angst replaced by adult troubles. There is much talk among the old friends. But, as in the comics, the freckle-faced Archie must still choose between the dewy-eyed blonde and the spoiled-rich brunette. The weirdest bit in the movie, if I recall correctly, is that woman-hater Jughead has a young son. There is no sign of a wife, or Big Ethel, around. In short, I remember not liking it much.

Going only by names, I don’t know who Dick Lowry is or who any of these actors are, though I might have seen them elsewhere.

I have found that there were at least two other films, Archie (1964) and Archie's Weird Mysteries (1999), a television series.

Impersonations
It’s not easy to recreate a comic book hero on screen. For those who demand exactness, like me, it’s also more difficult to accept them. They seldom live up to my expectations. Christopher Rich and Sam Whipple did not seem like Arch and Juggie to me. They could’ve been in any film.

But then, neither did Michael Keaton, George Clooney and Christian Bale as Batman, Brandon Routh as Superman, Robert Downey, Jr. as Iron Man, Tobey Maguire as Spider-Man, Billy Zane as The Phantom, Macaulay Culkin as Richie Rich, or Christian Clavier as Astérix and Gérard Depardieu as Obélix.

As far as Dr. Bruce Banner/The Hulk is concerned, I’ll give the benefit of the doubt to Eric Bana, Edward Norton, and Mark Ruffalo.

The only actors who have looked the part of the comic book heroes they have played are Christopher Reeve as Clark Kent/Superman, Val Kilmer as Bruce Wayne/Batman, and Ben Affleck as Matt Murdock/Daredevil.

Steven Spielberg did a wise thing by deciding to recapture Belgian cartoonist Georges ‘Hergé’ Remi’s famous hero, Tintin, only in animated form. The first of the series, The Adventures of Tintin: The Secret of the Unicorn (2011) was a big success mainly because the young reporter stayed inside his comic book.

Archie lives
Coming back to John L. Goldwater’s creation, Archie comics are still around, though the drawings and storyboards have gone through significant changes. The Riverdale gang is almost unrecognisable. They’re more snazzy and colourful. Some years ago, Archie Comics released a six-part series about Archie’s marriage (to either Betty or Veronica) that wasn’t entirely convincing. Today, the Archies look as if they are caught in a time warp, somewhere between Little Archie and Teenage Archie. Obviously, Archie Comics is catering to a new and young readership.

A couple of days ago, the family picked up some old Archie double digests (classified as magazines) and it felt nice to read the original adventures of freckle face and his friends. When was the last time you read an Archie comic?
Written by Prashant C. Trikannad at 03:10:00