The Girl from Sunset Ranch by Amy Bell Marlowe (1914)

This review of a semi-western book is my contribution for Forgotten Books over at Patti Abbott’s blog Pattinase.

“If I could only clear dad's name!” 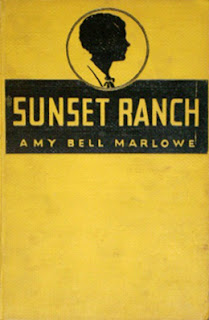 The Girl from Sunset Ranch, or Alone in a Great City, by Amy Bell Marlowe, a pen name of the Stratemeyer Syndicate, is classified as a western as well as for young readers, particularly girls. The 243-page book is a mixture of the two and will appeal to readers of both literary forms.

The story originates in the open and invigorating ranges of the west and plays out almost entirely in the narrow and stifling environment of the east. Caught between these opposite worlds is Helen Morrell, a lovely and kind-spirited 16-year old girl and the sole owner of Sunset Ranch, one of the few remaining great ranches of the west.

Helen was born on Sunset Ranch and brought up by her father, Prince Morrell, the wealthy cattle king who kept away from the public glare. He had a good reason. Years before he set up the ranch near Elberon, Montana, the cattleman, originally an Easterner, had fled New York to escape arrest after he was falsely accused of embezzling money from the bank account of the firm in which he was a major partner.

As the years passed, Morrell, an honest gentleman, built his cattle ranch into a cattle empire and repaid all his firm’s creditors but could not remove the stain on his name. This pained him no end.

Then, one day, as Morrell is dying, he tells Helen about his past and appeals to her to go to New York and clear his name. The cattleman has another reason for sending his little girl eastward: he is afraid to leave his daughter alone behind—“in this rough place out here”—and wants her to grow up among people with refinement.

Helen, who never tires of mentioning how much she loves Sunset Ranch, has spent her childhood and early youth among cowpunchers, squaws, greasers, and half-breeds, simple folk who dote on her as much as her father did. In fact, Big Hen Billings, the whiskered giant foreman of the ranch, treats her like his own daughter. So trustworthy is he that Prince Morrell has made him executor and guardian of Helen.

Two months after her father’s death, the poor little rich girl heads east, by the transcontinental train, to keep a promise she made to a man she loved more than anyone in the world and the only family she ever knew. 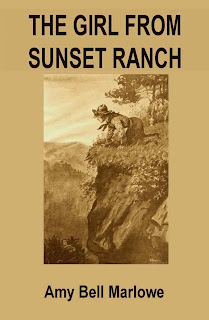 In New York, the brave, kind, and open hearted Helen Morrell is confronted by a world far removed from the gentle plains of distant Montana. She discovers the dark side of the Great City; selfish and pompous relatives who live in a mansion on Madison Avenue and hate her presence, to the extent that she must enter and exit through the ‘lower’ door; the greedy man who framed her father: the old bookkeeper who worked in Morrell’s firm and now lives in abject poverty; and the old nurse with the soft skin and a kindly smile confined to the attic by her Uncle Starkweather and his three daughters, her cousins.

“Such a thing as inhospitality could not be imagined by Helen Morrell. A begging Indian was never turned away from Sunset Ranch. A perfect stranger—even a sheepman—would be hospitably treated in Montana. Her cousins hadn't the decencies of red Indians.”

Helen is shocked but does not lose hope and returns hatred with love at every turn. The pretty cowgirl, who hasn't told anyone that she is the owner of Sunset Ranch and thousands upon thousands of acres of grazing land or is worth more than half-a-million dollars, finds warmth and hospitality on Madison Street, the underbelly of New York, in her friendship with a poor Russian girl. Later, she meets a young handsome lawyer whom she had rescued after he fell off the cliff near her ranch and who now helps her clear her father’s name. In the end Helen is only too glad to return to Sunset Ranch, back to doing the things she loves doing, "roping steers, breaking ponies, and riding bareback like an Indian."

Final word
The Girl from the Sunset Ranch is a delightful and charming story of a girl with strong moral values and one who is mature far beyond her young age. An interesting element in the book is the many different ways in which Helen, her foreman, Big Hen Billings, her Jewish friend from Madison Street, and her three cousins speak, which brings the narrative alive.

For me, the key aspect of this book was Amy Bell Marlowe’s constant comparison between life in the west and in the east, as evident in the hospitality of Sunset Ranch and the unfriendliness of Starkweather Mansion and the way the homeless and the outsider are treated in the two opposite poles of America. I got the impression that Marlowe came from the Frontier for the pseudonymous writer never loses an opportunity to belittle the east. The west is where the best is could well be the tagline of this book.

About the author
An article on Wikipedia says that Amy Bell Marlowe was a pseudonym used by the Stratemeyer Syndicate which published this and other books as part of the ‘Amy Bell Marlowe's Books for Girls’ series. The Syndicate was founded by Edward Stratemeyer and is best known for producing the Bobbsey Twins, Hardy Boys, Nancy Drew, Rover Boys, and Tom Swift series.

Other books by Amy Bell Marlowe are Frances of the Ranges, or The Old Ranchman's Treasure, 1915; The Girls of Hillcrest Farm, or The Secret of the Rocks, 1914; A Little Miss Nobody, or With the Girls of Pinewood Hall, 1914; and Wyn's Camping Days, or The Outing of the Go-Ahead Club, 1914.

Unusual terms
Taking a leaf from the excellent blog published by Ron Scheer, a noted expert on westerns, especially frontier fiction, I reproduce below some of the unusual words I came across in the book. The meanings are courtesy internet.

1. Coulees: applied rather loosely to different landforms, all of which refer to a kind of valley or drainage zone.

2. Greenie: a newcomer, a greenhorn

5. Chee: a word used for emphasis when talking about something good
Written by Prashant C. Trikannad at 11:04:00