The husband, the wife, and the other woman is the theme of the films under review this Tuesday, for Overlooked Films, Audio & Video over at Todd Mason’s blog Sweet Freedom. 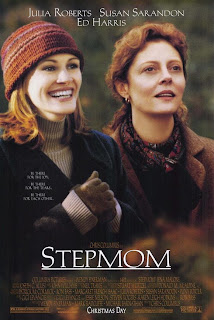 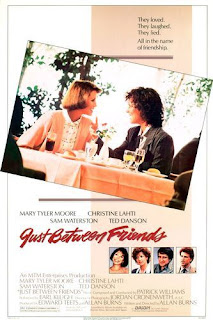 Take a good look at the two posters. You’ll notice that the names of the male actors appear after those of the female actors. In fact, you’ll also notice that the male actors are nowhere in the main picture frame. That is because the films are more about the women and less about the men. Yet, the men are very much there, though, almost by accident. But, take them out and there would be neither a story nor a film in either case.

The men are caught between two women who love them (or loved them) and who stake a legitimate claim to their families, their children, and their future. It may seem as if Just Between Friends and Stepmom is about the proverbial “husband, wife, and the other woman’ and while they are to a considerable extent, the films are really about the relationship between the women and their coming to terms with the reality that they love (or loved) the same men—their lives entwined by a twist of fate.


The relationship that Holly Davis (Mary Tyler Moore) and Sandy Dunlap (Christine Lahti) share in Just Between Friends is identical to the one that Jackie Harrison (Susan Sarandon) and Isabel Kelly (Julia Roberts) share in Stepmom.

While a tragedy helps close friends Holly and Sandy bury their differences and come together in Just Between friends, the terminal illness of Jackie and her gracious acceptance of her ex-husband’s girlfriend, Isabel, helps the two women bond in Stepmom. On her part Isabel accepts Jackie’s natural instinct to raise her children the way she wants and tries to fit into that role as best as she can.

Chip Davis (Ted Danson) and Luke Harrison (Ed Harris) are two fine men, caring husbands (ex in the case of Luke), and doting fathers. Chip loves his wife Holly in Just Between Friends while Luke is considerate towards his ailing ex-wife Jackie who lives with him, their two children, and his new flame, Isabel, in Stepmom.

Directors Allan Burns and Chris Columbus handle the relationships between the two pairs of women with great sensitivity. There is mutual respect, understanding, sympathy, and even compassion between the women. For instance, in a Thanksgiving scene in Stepmom (I think), Isabel is about to click a family photo of Jackie, Luke and their two children when Jackie beckons Isabel to join them. Isabel sits with the family on the couch and is pleasantly surprised when Jackie puts an arm around her, as all five of them smile into the camera.

Just Between Friends and Stepmom are two very nice films and what makes them a touch more special is the excellent casting, especially Mary Tyler Moore and Susan Sarandon as the wronged wives who never actually grieve over the cruel blow fate deals them.