Here are two vintage short stories for Friday’s Forgotten Books at Patti Abbott’s blog Pattinase which is being hosted by B.V. Lawson at In Reference to Murder - www.inreferencetomurder.typepad.com this week.

“Richard Burwell, of New York, will never cease to regret that the French language was not made a part of his education.” 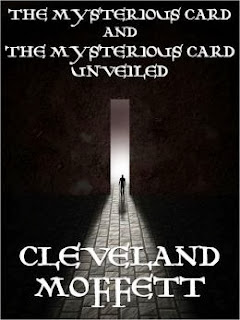 I have read many short stories but none, in recent memory, were as frustrating as The Mysterious Card by Cleveland Moffett (1863-1926). It starts with a bang and ends in a whimper. Perhaps, the American journalist, author, and playwright meant to provoke the reader for seven months later he produced a sequel, The Mysterious Card Unveiled, and redeemed himself.

The two stories numbering 31 pages in all were first published in The Black Cat magazine of February and August 1896 respectively.

The Mysterious Card is a straight tale with an element of suspense that increases several levels in The Mysterious Card Unveiled. Read together, the stories are a blend of the occult and the paranormal with a touch of horror depending on how you look at it.

In The Mysterious Card, Richard Burwell is visiting Paris on business while his wife and daughter are vacationing in London. Bored and lonely, the unassuming gentleman goes to the Folies Bergëre, a cabaret music hall, and is sitting in its garden when a mysterious woman accompanied by a tall distinguished man with glasses leaves a card on his table and walks away.

The card bears some French words written in purple ink. Since Burwell does not know the language, he decides to find out their meaning and gets the biggest shock of his life. The people he shows the card to are so repulsed by what they see that they want nothing to do with him. Hotel managers and proprietors throw him out, his wife labels him a monster and disowns him, and his closest friends desert him. The French police arrest him but the American Legation (diplomatic mission) in Paris bails him out with the condition that he leaves the country within 24 hours.

Burwell returns to New York, angry, confused, anxious, humiliated, and dejected, as his frantic quest to unravel the secrets of the card ends in a manner he wouldn't have thought his entire life.

Then, one day, Burwell sees the mysterious lady in a carriage on Broadway. After many attempts he succeeds in meeting her at her house and finds out that she is ailing and dying. She recognises him and murmurs, “I gave you the card because I wanted you to…to…”

As I said, the two stories are only 31 pages long and I’m not going to spoil it for those of you who haven’t read them, which means I can tell you very little of what happens in the sequel. 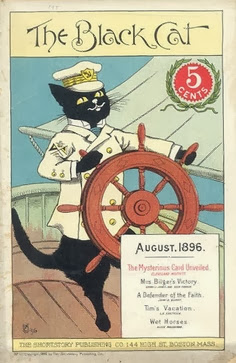 The events in The Mysterious Card Unveiled take place 11 years after Richard Burwell returns home. It is a first-person account by a kind and scrupulous physician who is treating him for mental disorder and unspecific ailments. He is actually looking for someone to talk to, someone he can unburden himself on. The doctor, an enthusiastic student of palmistry, takes a keen interest in Burwell when he discovers on his patient’s palm a sinister double circle on Saturn's mount, with the cross inside, “a marking so rare as to portend some stupendous destiny of good or evil, more probably the latter.”

Much happens from this point to the end of the story, which is actually a flashback as the tall man with the glasses approaches the physician to explain everything from the beginning until the time his sister, the mysterious lady, dropped the card in front of Burwell. The woman, with a passion for the occult, had discovered that he was possessed by the demon, “a kulos-man, a fiend-soul,” as she called him, and was responsible for murders and mutilations and other unthinkable crimes.

Final word
The secret of the mysterious white card—the cursed life of the wealthy and philanthropic Richard Burwell—is revealed in the end, though, in an unexpected way.

As many writers of that period did, Cleveland Moffett touches upon the age-old principles of good and evil that exists in human beings, “the great truth of a dual soul existence,” and how it can be used worthily.

The two short stories are written in a clear and simple style, again reminiscent of writing of the late 19th and early 20th century. I particularly liked Moffett’s graphic description of the kulos-man as evident from the following lines: “Think of a loved face suddenly melting before your eyes into a grinning skull, then into a mass of putrefaction, then into the ugliest fiend of hell, leering at you, distorted with all the marks of vice and shame. That is what I saw, that is what they had seen!"

About the author
Cleveland Moffett was known as a teller of weird tales. These two stories were some of the most famous tales published by The Black Cat magazine. He also wrote plays and articles for magazines and weeklies. He translated Cosmopolis, a novel by French author Paul Bourget. The reason The Mysterious Card received a lot of attention was because he did not reveal the secret of the white card. Interest in this story inspired him to write the sequel and unravel the puzzle. Moffett also wrote detective stories like True Tales from the Archives of the Pinkertons (1897) and Real Detective Stories (1898). Most of his work is available in the public domain.