The Little Sisters of the Poor Home for the Aged next to my house in northwest Mumbai (Bombay) organises annual sales of a range of new and old household items like clothes, furniture, books, and foodstuffs, as well as lucky draws for the unlucky, the proceeds from which go towards the care of the elderly inmates of the Home.

This morning we attended one such bargain sale and I made my way to a small unused pantry where the section on books was located. The novels, mostly paperbacks and selling at less than half a dollar, were strewn carelessly above and below the dusty kitchen platform, in the dry sink, and in a couple of cartons. 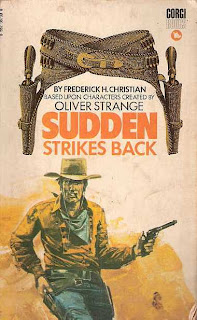 Most visitors to the sale looked inside the pantry, probably murmured “oh books,” and went away. So we had the place all to ourselves except for the elderly lady who managed it. She sat there reading some biblical pamphlet. The only time she said anything was when two young men walked in, picked up a couple of books at random, put them back, and walked out. She said, “Your eyes and hands should know the books you’re looking for.” I think what she meant was the moment your eyes spot a book your hands will automatically pick them up, because, as a book lover, you’re familiar with the book and its author. It left me scratching my head, nonetheless.

Whoever donated all these books knows books well; hopefully, well enough to have read them first and then donated them for a worthy cause. 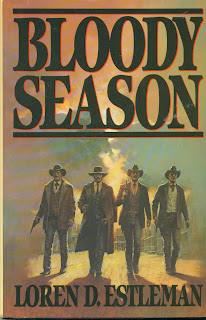 We bought nine books of which four were mine of which two were by my favourite writers, namely Sudden Strikes Back, a rare western by Frederick H. Christian (English author Frederick Nolan) based upon characters originally created by his countryman Oliver Strange, and the monstrous 544-page Hatter’s Castle by Scottish writer A.J. Cronin of whom reference has been made elsewhere on this blog.

The other two novels I picked up were both westerns: Bloody Season by seasoned American writer Loren D. Estleman, and Breakheart Pass by popular Scottish author Alistair MacLean.

Breakheart Pass rang a bell for some time until my wife mentioned that we had seen the movie. I reached for IMDb. The film, made by Tom Gries in 1975, is about “A train with medical supplies and a small US Army unit heading through the Rocky Mountains towards the plagued Fort of Humboldt. Its passengers include a territory governor, a priest, a doctor, and a US Marshal with his prisoner, John Deakin. However, nothing on that train is what it seems.” The film starred Charles Bronson, Ben Johnson, Richard Crenna, Jill Ireland, and Charles Durning.

Many of MacLean’s novels have been turned into successful films, notably The Guns of Navarone, Ice Station Zebra, Where Eagles Dare, and Force 10 From Navarone. 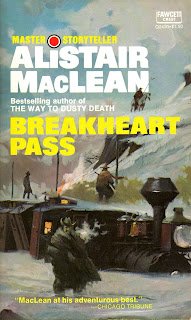 The back cover of my used 1987 Fonata/Collins edition says, “The Rocky Mountains, Winter 1873… One of the most desolate stretches of railroad in the West. Travelling along it is a crowded troop train, bound for the cholera-stricken garrison at Fort Humboldt. On board—the Governor of Nevada, the daughter of the fort’s commander and a US marshal escorting a notorious outlaw. Between them and safety are the hostile Paiute Indians—and a man who will stop at nothing—even murder…”

Both the novel and the film look interesting and I might allow my yellowed and dog-eared copy of Breakheart Pass to jump the queue. In fact, I've been toying with the idea of my own Alistair MacLean Festival for quite some time now. All his novels have been reprinted. Like many popular authors of his era, MacLean was predictable but entertaining.

The nine books, which included three Jeffrey Archer titles, cost us Rs.180 ($3.6)—a fine catch on a lazy Sunday afternoon.
Written by Prashant C. Trikannad at 06:11:00