A not so memorable entry for this week’s Overlooked Films, Audio and Video at Todd Mason’s blog Sweet Freedom. 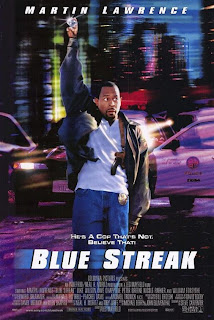 There is perverse satisfaction in doing the very things that you don’t want to do, like watching a Martin Lawrence film, Blue Streak (1999), and making it worse by watching a Vince Vaughn movie, The Break-Up (2006), soon after. But then, those are the perils of taking a month-long break from blogging and having free access to the remote. You do all kinds of silly things. It’s not as if there’s nothing more worthwhile to do. As Groucho Marx would say, “I find television very educating. Every time somebody turns on the set, I go into the other room and read a book.”

Lawrence is a funny actor though he’s not so funny when he makes faces and big eyes while talking. It might be his trademark but if you eat with your mouth closed, you ought to talk without twisting your face, unless you’re Rowan Atkinson or Jim Carrey. Comedy suits Lawrence though not as well as it does Eddie Murphy whose Trading Places, Beverly Hills Cop, and The Distinguished Gentleman never fails to amuse even today.

I can’t think of a Lawrence film I’d watch twice with the exception of Wild Hogs (2007), a riot of a film whose singularly impressive feature is, incidentally, not Lawrence but the combined performance of all four including his three road-hog buddies, William H. Macy, Tim Allen, and John Travolta. Of this crazy lot Macy steals the show, Travolta proves he can do comedy, and baddie Ray Liotta sneers like a hyena till curtains down.

Blue Streak is an average film which, barring a few one-liners and a hyperactive Lawrence, fails to live up to its “comedy” tag. The story is unconvincing but passes muster because I don’t think it’s meant to be taken seriously.

Miles Logan (Lawrence) and his cronies are burglars who steal a large diamond but their near successful heist is marred at the last moment following double-cross by one of the crooks and the arrival of cops. Just before his impending arrest, Logan hides the diamond in the air vent of an under-construction building and makes a mental note of the place he hid it in. Two years later, Logan returns to the site of the old building, to retrieve his precious stone, and is shocked to find a swanky LAPD police station in its place. Now the only way to go after the diamond is to pose as a cop.


This is where the plot defies logic: Logan gets an elderly acquaintance to forge documents and produce an authentic shield (police badge) and walks right into the police station, suckering everyone including police chief Rizzo (Graham Beckel) and fellow detectives Carlson (Luke Wilson) and Hardcastle (William Forsythe) and going on to head the homicide division, a dubious position he earns because, rather unintentionally, he uses his own experience as a crook to catch other crooks.

One reason I did not like Blue Streak, directed by Les Mayfield, is the use of needless profanity which I have come to associate with a Martin Lawrence film. Here’s a sample:

Tulley (his accomplice): “I'll rip your lips off, and kiss my ass with them shits. I'll rip your tongue out, and lick my balls with it.”

Logan: “What are you gonna do with one shoelace? Floss your ass with it!”

Now that last line might actually seem funny but it isn’t. The next time I have the remote, I am going to remember Grouch’s words and promptly act upon them.
Written by Prashant C. Trikannad at 04:48:00