When Sony launched its portable TV

This Tuesday, I don’t have a review for Overlooked Films and/or Other A/V at Todd Mason’s blog Sweet Freedom. Instead, I have a television set you may have overlooked or forgotten about.


Sony launched Japan's first transistor radio in 1955, exactly a decade after the atomic bombings of Hiroshima and Nagasaki. Five years later, in May 1960, Sony came out with the first transistor TV. It was, in fact, the world's first direct-view TV and a dream come true for Masaru Ibuka, Sony founder and President at the time. 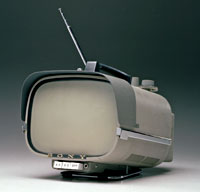 Making the transition from transistor radios to transistor TVs with both sound and visual was a challenge for Sony which, as is its custom, lost no time in getting around the new device.

"Transistors with enough display power to be useful for TVs were comparably more difficult to create than transistors for radios, but Sony had perfected these special transistors the year before, in 1958, and work on developing a transistor TV was already underway," Sony observed in a short piece in Time Capsule: Revealing Sony Across Time.

When Masaru Ibuka asked a group of people representing US TV manufacturers whether they thought small TVs would sell or not, they said no in one voice. In 1962, Sony launched the TV5-303, which was even smaller than the TV8-301, and proved them wrong. The smaller than the small TV was a big hit in the US.