For the last Friday’s Forgotten Books of 2012 at Patti Abbott’s blog Pattinase, a look at an action-packed novel about a small band of combatants fighting America’s dirty war.
“The US Navy is carrying contraband for Jeddah.” 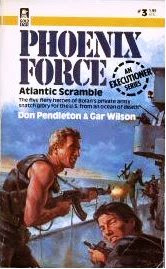 In Atlantic Scramble, the third Phoenix Force novel and a spin-off of the Executioner series, a five-man anti-terrorist squad takes on Libyan terrorist Khader Ghazawi and his mercenaries who steal America’s super-weapon, the Dessler Laser Submachine Gun, and make off with it in a recommissioned subchaser, the U.S.S. Beaumont.

The terrorists, who belong to an outfit called Red Anvil, incapacitate the Pentagon’s Red Bluff Arsenal (a secret installation at Odessa, Texas), drug its personnel into zombies, kill dozens of soldiers, and escape with the deadly weapon with inside help.

The Phoenix Force led by Yakov Katzenelenbogen, a French-Israeli commando, lose no time in zeroing in on the US vessel cruising at high speeds through the Atlantic in the dead of night and later taking a fight to an old Russian diesel U-boat.

Yakov and his four men—Gary Manning, the Canadian explosives engineer; Keio Ohara, the unusually tall Japanese martial arts expert; David McCarter, a former SAS operator and pilot; and Rafael Encizo, a survivor of Castro's regime and an expert in underwater warfare—make short shrift of the mission.

The Phoenix Force, first introduced in Argentine Deadline, work for Stony Man, a secret anti-terrorist organisation formed by Mack Bolan and run by Hal Brognola, its project director, with the occasional involvement of ace pilot Jack Grimaldi. Phoenix Force and Able Team are spin-offs of The Executioner series created by American writer Don Pendleton. These books have been published by Gold Eagle since 1982.

The Phoenix Force and Able Team novels have been written by various authors under the collective pseudonym of Gar Wilson.