Fathers And Sons or Sons And Fathers?

Wars are fought in Commando Comics and their close and distant cousins like Battle Picture Library and Sgt. Rock. The battles continue to rage in Commando which has been published and republished by D.C. Thomson of Dundee, Scotland, since 1961. Recently, I came across two titles which left me baffled—Commando No.4152: Fathers And Sons and Commando No.4427: Sons And Fathers. For a moment I thought it was printer's devil, with misleading cover illustration and all, that had gone unnoticed. On a closer look I found they were separate issues with distinct stories, both celebrating an event. 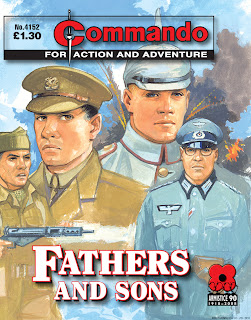 The Armistice issue (left) was one of an eight-part series brought out by Commando on the events of the Great War. It says, "Two young soldiers—one British, one German—were about to go into battle as the Second World War broke out. Like many of their friends, their fathers had seen action years earlier in the First World War. But for this particular pair of warriors, there was a bizarre link which, one day, would end in bitter tragedy..."

The Golden Jubilee comic (below) declares, "There they stood, back-to-back, Beretta sub-machine guns stuttering as they fought for their lives. It had been the same many years before as their fathers had battled shoulder-to-shoulder in a heroic but doomed last stand. Would history repeat itself? Or was there another twist to the tale?"

Commando Comics go with two popular themes: British and German soldiers fight each other, which is usually the case, or they fight side by side, on rare occasions. One way or other, Commando Comics are eminently readable. 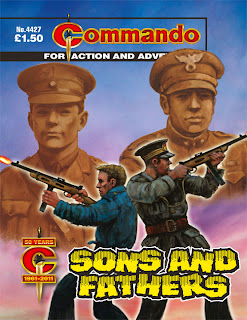