A Stranger in the Family by Robert Barnard (2010)

A caveat: yesterday, I reviewed half a film. Today, I review half a book. Fortunately, I've’ read enough to review the British crime writer’s penultimate novel for the Robert Barnard special at Patti Abbott’s blog Pattinase this Friday.

‘Kidnapping’s pretty rare these days. Where did this one take place?’
‘In Sicily.’
‘Sicily? That explains it. Dicey sort of place in my experience. And what’s the information you have that you want to report?’
‘I am the child that was kidnapped…’ 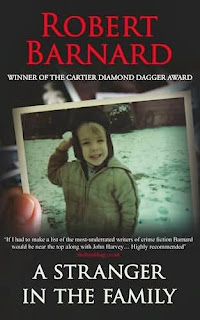 Two years ago, an Indian-born Australian businessman was reunited with his biological family in Khandwa, a city in the central Indian state of Madhya Pradesh, after 25 years. He was separated from his family at a railway station when he was five years old. Later, he was adopted by a family in Australia. As he grew up he never forgot who he was or where he came from. This is a true story and it was reported widely in the media, especially since Google Maps and Facebook helped the young man find his real family.

Newborns and small children routinely disappear in India, as they do in many parts of the world. While some are genuinely separated from their families, like the five-year old boy above, others are kidnapped from bus stops and railway stations and homes and hospitals. While boys are abducted by those desperate for male offsprings, girls are often kidnapped and forced into the flesh trade. There is no official count of India’s missing children.

The separation or abduction of children is a recurrent plot theme in Indian films, particularly Hindi films made by Bollywood, which almost always have a happy ending.

It was for these reasons that A Stranger in the Family by Robert Barnard struck a chord with me. His main character, Kit Philipsons, is born Peter Novello in Leeds, England, kidnapped in Sicily when he is three, adopted and raised in Glasgow, Scotland, and returns to his biological family in Leeds at the age of twenty. 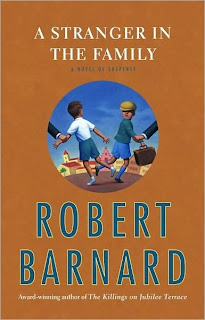 The 250-odd page novel recounts the story of Kit and his quiet but desperate quest to find out who abducted him, while on a holiday in Sicily with his family, and why. The more Kit digs into his past, the murkier it gets, as he sees a sinister link between the Sicilian mafia, his kind and doting adoptive parents and their Jewish background in Nazi Germany, and his biological father, a lawyer by profession, who brands him as an impostor and an illegitimate.

To make matters worse, Kit’s sudden reappearance in Leeds results in a rift instead of a reunion with his biological family. While his birth mother, Isla, who has long separated from her husband, welcomes Kit with open arms, his siblings, two brothers and sister, are not quite happy as they would now have to divide the inheritance in four parts. Kit wants no share of the family wealth as his adoptive parents, Jürgen and Genevieve, have left him with plenty.

All Kit wants is the truth behind his kidnapping and in search of it he casts a wide net starting with the local police station in Leeds where he has frequent interviews with Sergeant Hargreaves who is sympathetic to his case. Kit meets people directly and indirectly connected with both his biological and adoptive family in the hope that he'll learn what exactly happened twenty years ago.

A Stranger in the Family is not strictly “a novel of suspense” as claimed but it has some elements of suspense. The story, as the title suggests, is self-explanatory. There is no serious character development. Instead, the author brings out the characteristics of the various players through speech and mannerism. There is a certain aloofness about Kit Philipsons and his interactions with people, most notably his birth family. His character doesn't touch a chord as much as his plight does. Robert Barnard's writing is simple but in no way is it ordinary. In fact, his style is one of the better aspects of the book.

A Stranger in the Family falls somewhere between literary fiction and a popular novel. The book is available for Kindle, at Amazon. Recommended.
Written by Prashant C. Trikannad at 04:09:00