Quentin Tarantino was three years old when Django was released in 1966. The film seems to have made an impression on him. For, 46 years later, he made Django Unchained and recreated the coffin-dragging gunslinger from scratch. Except for raw courage, skill with a gun, and few lines, Jamie Foxx’s Django has little in common with Franco Nero’s Django, or the other spin-offs one of which had Terence Hill in the role. Tarantino paid his tribute to the original version by casting Nero in his film. 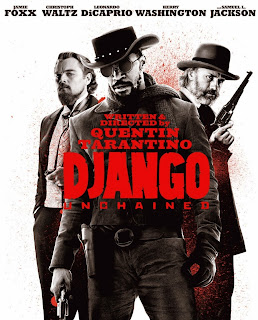 I missed Django Unchained when it came in the theatres last year. Then, last night, I watched a portion of the film on cable. It has all the hallmarks of a Tarantino film: bloody vendetta, insensate violence, intense dialogue, oodles of machismo, and shock treatment. I’m basing my opinion on the films I have seen, Reservoir Dogs, Pulp Fiction, Kill Bill 1 & 2, and Inglourious Basterds. Tarantino makes fewer movies but he makes them well. He can turn reason on its head and still be convincing.

I thought casting Jamie Foxx as Django was a shrewd and a brilliant move. If you grew up watching Nero as Django, as I did, it’s a bit of a culture shock to see Foxx in the role which Denzel Washington apparently refused to do. Foxx, however, steps into Nero’s shoes without effort.

In the pre-Civil War days of slavery, coloured people are treated inhumanely. White men buy slaves and whip them into subjugation often pitting blacks against blacks. The brutality of it all is unsettling. For example, Calvin Candie (Leonardo DiCaprio in a villainous role), a rich and cruel planter who owns many slaves, is sitting on a sofa, smoking a cigar, and watching two men fight to the death. Either one must kill the other, the final blow coming from a hammer carelessly tossed by Candie. The bloody scene was cut, as stipulated by Indian television guidelines, but I knew what was coming next. 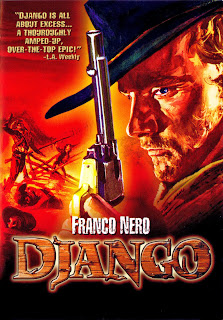 Between commercial breaks, we are told that DiCaprio was apprehensive about the strong racial overtone of the film and particularly his character and that Tarantino had to convince him of the need for some of the graphic scenes.

Elsewhere in the film, the mean and nasty Brittle brothers strip a black woman, tie her to a tree, and get ready to whip her when Django strides up to them and shoots two of the men at point blank range. In another scene, he lies prone on a small hill and momentarily grapples with his conscience before killing a man working the field with his son.

All the white men were wanted dead or alive with a bounty on their heads.

The bounty is collected by Dr. King Schultz (Christoph Waltz) who, ridiculous as it sounds, is a German dentist turned bounty hunter which is obviously a more lucrative occupation. Early in the film he buys Django’s freedom but instead of treating him like a slave, he befriends him and treats him as an equal and makes him his deputy. Together, they kill many wanted men. In return, Dr. Schultz agrees to help Django rescue his wife from slavery under Calvin Candie. This is the key part I missed.


I have read about slavery in America in the 18th and 19th centuries, leading up to the Civil War, but I don't know enough to understand it in the context of this film. For instance, while some slaves are treated like slaves, others are treated like normal people who wear fine clothes, move around freely, sit in the living rooms, and talk with their masters. I don't know how close white and black people were in those days but Dr. Schultz and Django share so friendly a relationship as to raise eyebrows. They ride in and out of towns and ranch homes without fear of being shot in the back. The bounty hunter spends lavishly on his friend, buying him a cowboy’s attire, guns, and a horse with a new saddle. Above all, Django shoots white men without fear of reprisals. Dr. Schultz defends himself and Django by brandishing ‘dead or alive’ notices for the men they kill. But did black men actually kill white men in cold blood?

These are some of the issues that left me a trifle confused. Historically, I don't know how close to the truth some of the scenes in the film are, even if some of them are exaggerated.

Django Unchained is an action-packed western shot in the backdrop of an emotive and sensitive issue like slavery and racism. I have been told not to take Tarantino's movies seriously and that the worth of his unconventional films lies in their entertainment value. This is true of Django Unchained which also hits a raw nerve unlike the other five movies I saw.
Written by Prashant C. Trikannad at 04:10:00