Allen stared at the letters on the rock as if he had not spelled out the words aright. But there was no mistake. They really read “Barnaby Winthrop's Mine. 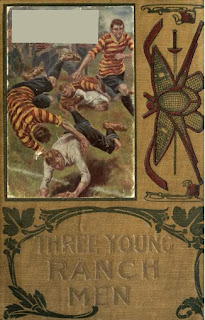 Three Young Ranchmen or Daring Adventures in the Great West reads like a ‘young adult’ packaged inside a ‘western.’ Some readers may see it the other way around. Either way this is a very entertaining story: it has action, adventure, and suspense.

The story revolves around three brothers, Allen, Chetwood and Paul Winthrop, who live on a ranch in the mountainous region of Idaho, close to the Salmon River. Their father who owned the Big Bear ranch died while his three sons were still young. However, before his death he willed it to his sons equally and appointed his brother, Barnaby, as their guardian. Uncle and nephews are warm and generous towards each other.

The brothers are tall, sturdy, brave, and handsome as well as honest and hardworking. They share a close bond that would make any parent proud. They also share duties on the ranch where life is tough and trouble intrudes in the form of horse thieves belonging to an old Sol Davids gang and Captain Hank Grady, a mean and unscrupulous man of forty who wants to posses the Winthrop homestead at any cost. He knows the value of the ranch and its proximity to a secret mine.

While the three young ranchmen manage the sprawling ranch and the rolling land around it, their Uncle Barnaby, an old prospector, is away in the hills looking for gold and silver. In his absence, Chet and Paul look up to their big brother for guidance. Until one day, the old man vanishes without a trace. He was last seen in San Francisco where he’d been making plans to start a company to develop the gold and silver mine he’d secretly discovered—the richest claim in all of Idaho—worth over a million dollars.

As Chet and Paul guard their ranch home from Captain Grady and the old gang, Allen sets off to look for their uncle, with Ike Watson, an old friend and a reliable hunter with a peculiar dialect, and Noel Urner, a broker and speculator from New York. Noel turns up in Idaho after he fails to meet Barnaby at the appointed time at Golden Nugget House, a meeting place for old-time miners and prospectors, in San Francisco. Their search eventually leads them to Captain Grady whose role in the kidnapping of Barnaby, in the hope that he can grab the ranch and the secret mine, is exposed in the end.


Final word
Allen, more than his two brothers, has a bigger adventure in Three Young Ranchmen but not without some tense moments, as he goes after the horse thieves, rides his own right through a sabotaged bridge and into the waters beneath, discovers his uncle’s mine in a cave inside a mountain, finds his way across treacherous underground, stumbles into a snake’s nest and is nearly poisoned to death, and encounters a grizzly bear that turns on him.

There is almost a childlike innocence about the boys and the way they go about defending their home and looking for their uncle, and eventually hoping to get back to their fun loving and peaceful existence. This is also evident in their precise conversation. For instance, in the opening pages of the first chapter, Chet and Paul are awaiting Allen's return from somewhere, when Chet tells his brother, "I don't care so much about the dullness—I like to hunt and fish and round up the cattle just as well as any one—but what I'm complaining of is the uncertainty of the way things are going to turn. For all we know, we may be cast adrift, as the saying goes, any day."

To which Paul replies, "That is true, although I imagine our title to the ranch is O. K. If those title papers hadn't been burned up when one end of the house took fire I wouldn't worry a bit."

If I compared this absorbing western to young adult, it is because Allen, Chet and Paul and their boyish nature and zest for adventure reminded me of brothers Frank and Joe Hardy, amateur detectives, and their best friend Chet Morton from the Hardy Boys. Only the setting is different. The book, available at Gutenberg and elsewhere, will appeal to readers of both genres.

About the author
By a coincidence, Captain Ralph Bonehill, I discovered later, is none other than Edward L. Stratemeyer, the prolific American writer and creator of The Rover Boys, The Bobbsey Twins, Tom Swift, The Hardy Boys, and Nancy Drew series, among several others. As Bonehill, he is also the author of A Sailor Boy with Dewey, For the Liberty of Texas, and The Young Bandmaster.
Written by Prashant C. Trikannad at 09:48:00