The Name Is Archer by Ross Macdonald, 1955

The spotlight is on Ross Macdonald for this Friday’s Forgotten Books over at Patti Abbott’s blog Pattinase.

I SAT in my brand-new office with the odor of paint in my nostrils and waited for something to happen.
— Opening line of ‘Find the Woman’ in which Ross Macdonald first introduced Lew Archer 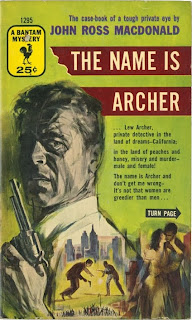 If something doesn’t happen then Lew Archer, the private detective from Southern California, makes something happen, as he does in two out of the three stories I’ve read so far in this collection of seven original stories by Ross Macdonald (Kenneth Millar).

In both the stories, Gone Girl and The Bearded Lady, Archer happens to be around when a crime is about to take place or has already taken place. When he is not hired to solve the case, he hangs around to investigate the crime. Although money is thrust into Archer’s hands, you get the impression that it’s not important in his scheme of things and he'll, matter-of-factly, pocket a fifty-dollar advance.

In Gone Girl, for instance, Archer is outside his room in a motel when he sees a girl with blood on her hands. Before long, he is employed by the girl, the only daughter of the motel owner, to investigate the death of a man. Did she kill him? Archer finds more than he’d bargained for. 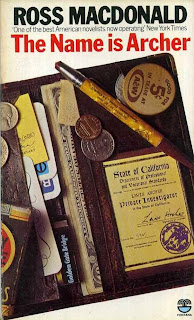 In the second story, Archer is visiting a close friend, a talented but down-on-his-luck artist, who vanishes without a trace, as does an expensive painting from the museum he frequented, putting a family’s reputation under a cloud. Archer to the rescue again.

You don’t know what Lew Archer’s motivation is but he has enough to want to stick his neck out.

In Find the Woman, the first story in this collection, the private detective, as Archer likes to call himself, is actually waiting for something to happen when Millicent Dreen, a publicity director for a production house, walks into his office and hires him to look for Una, her beautiful twenty-two year old daughter who has been missing from their beach house. Dreen, who is no less easy on the eyes, suspects that her daughter, a famous actor, drowned because she wasn’t a strong swimmer. Archer accepts the case and pockets the hundred-dollar advance. 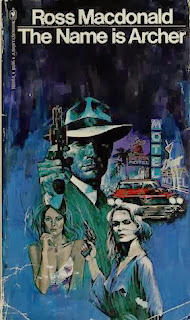 It’s not long before Lew Archer gets to the bottom of the case, literally. Una was married to Jack Rossiter, a handsome and athletic naval officer whose long stretch away from home gave her reason to have sexual affairs with other men and her mother the perfect ruse to engineer her own daughter’s death by drowning. To say why she does it or how she does it would be giving too much away.

Ross Macdonald first introduced Lew Archer in Find the Woman, a short story that was published in the June 1946 edition of Ellery Queen’s Mystery Magazine. The fictional private eye made his debut in a regular novel with The Moving Target in 1949. This was made into a film called Harper in 1966. It had Paul Newman as Lew Harper instead of Lew Archer. I haven't read the book or seen the film. In fact, The Moving Target is one of four secondhand Lew Archer novels I have. Not to have read even a single book yet is a criminal waste. 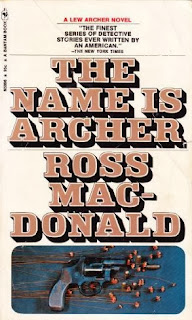 What did I like most about the three stories I read in The Name Is Archer? Apart from the writing, which is equivalent to a punch right in the solar plexus, and the not so flattering look at women and the depths to which they can sink, the celebrated author pulls a neat trick on the reader: a detective is hired by people guilty of a crime to investigate a crime that really isn't a crime, at least not in the strict sense. The catch-22 scenario in the stories reminded me of No Comebacks, 1982, a collection of ten stories in which Frederick Forsyth uses a similar ploy, the twist at the end of each tale leaving the reader a tad disappointed though not without acknowledging the writer’s brilliant deception.

While Ross Macdonald has admitted to being influenced by Raymond Chandler and Dashiell Hammett, whose works I’m not all that familiar with, his style of writing, if not in its intensity, is reminiscent of that other pillar of hardboiled fiction, Mickey Spillane, and his detective Mike Hammer. Clearly, Macdonald acknowledged his debt to Chandler when he told The Village Voice in 1975: “Chandler was and remains a hard man to follow.”


P.S.: After reading Patti's reviews as well as some other reviews of Ross Macdonald's works at her blog, Pattinase, I wish to mention that The Name Is Archer has been included in The Archer Files: The Complete Short Stories of Lew Archer edited by his biographer Tom Nolan. It contains stories from The Name Is Archer, Lew Archer: Private Investigator, and the three stories in Strangers in Town among other material.
Written by Prashant C. Trikannad at 04:03:00