Last week, I saw these two new films over two evenings. They were both worth going to the theatre. While there is no comparison between the real-life story of a merchant navy captain kidnapped by Somali pirates and that of the hammer-wielding Norse god who must protect the universe from annihilation, I preferred Captain Phillips over Thor: The Dark World. 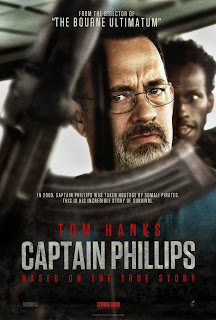 Captain Phillips is not exactly a suspense film but it had me on the edge of my seat from the time Captain Richard Phillips (Tom Hanks) of the Maersk Alabama spots, through a pair of binoculars, a small group of armed men pursuing the mighty US freighter in their tiny boats. He has just read an email warning him of pirates in the Indian Ocean, off the coast of Somalia and along the Horn of Africa, and so he knows who they are and what they are capable of.

Over the next gruelling one hour director Paul Greengrass (United 93) yanks you out of your seat and puts you first on the bridge of the Alabama and then inside the cramped lifeboat, in the midst of the weed-chewing skeletal pirates and their hostage, Captain Phillips. There is no escape for captain courageous or you.

I’d like to think of the film—based on the real Captain Richard Phillips who captained Maersk Alabama in 2009 and was actually taken hostage—as an action-adventure documentary that chronicles the harrowing experience of the captain and his rescue by navy seals. Incidentally, the Alabama was the first US cargo ship to be held hostage by Somali pirates in America’s 200-year old history.

Take Tom Hanks out of the film and you could actually be watching a plain documentary. Towards the end of the film the bearded Hanks, somewhat, reprises the role of Chuck Noland, the screaming and mentally-wrecked survivor in Cast Away (2000), admirably, as he realises the full import of his rescue and gives in to his bottled-up emotions. Until then, the captain is a picture of grace under pressure.

Muse (Barkhad Abdi) and Bilal (Barkhad Abdirahman), as two of the four Somali pirates, are superb if scary as hell. They could give local gangsters a run for their casino money.

Captain Phillips is a different kind of film: just one top-billed actor, a whole lot of minor actors, and a stripped-down script. The enactment of Somali piracy is true to life. It's the most engrossing film I've seen so far in 2013. 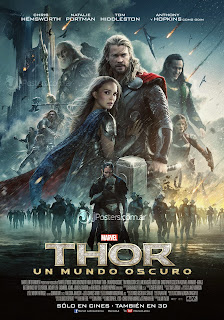 I also liked Thor: The Dark World, directed by Alan Taylor (The Sopranos, and Terminator, 2015) on three main counts: the special effects-induced Asgard, the abode of the Norse gods and the illuminated journey through intergalactic space; Loki (Tom Hiddleston), the animated and adoptive brother who envies and hates Thor, and is set to make a comeback in the third installment; and Malekith (Christopher Eccleston), the Spock-like leader of the Dark Elves race who wants to repossess Aether, the ultimate space weapon that will enable him to destroy the universe.

Oh, and Stellan Skarsgård runs naked around Stonehenge with cops in hot pursuit. What was that all about? And before I forget, Chris Helmsworth as the hammer-wielding Thor and Natalie Portman as the Aether-possessed Jane Foster put in a fine performance.

I’d have understood Thor better if an astrophysicist were sitting next to me and explaining all about the forces of gravity that make Thor look like a bouncing ball. 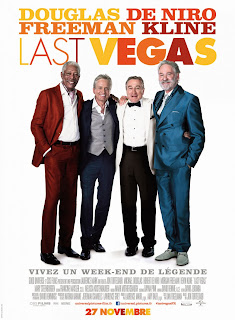 The film that I’m looking forward to seeing is Last Vegas (2013), a comedy about four sixty-plus childhood friends—Robert De Niro, Michael Douglas, Kevin Kline, and Morgan Freeman—who go to Las Vegas on a fun-trip. While Kline is a very good actor, I’d have preferred Jack Nicholson.
Written by Prashant C. Trikannad at 07:22:00