Hollywood veteran and aviator Howard Hughes directed only two films, Hell's Angels (1930) and The Outlaw (1943), and produced over two dozen films. I don't recall seeing any. This week I was going through the ebook version of Dime Mystery Magazine, September 1946, when I came across this vintage advert or plug about The Outlaw which, I assume, is his most famous film. 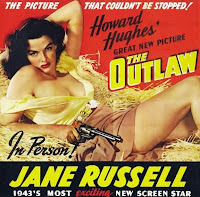 Apparently, the western film was banned by US censors soon after its world premier in San Francisco in June 1944. Rather than cut some of the objectionable scenes which, I think, had to do with the scantily-clad Jane Russell, the filmmaker pulled out the film from theatres across the world. I don't know whether this was true. The taglines of the American and Australian posters—"The picture that couldn't be stopped! (left) and "Not suitable for children" (below)—indicates that it was, though I suspect the whole thing was a plug for the success of the film.

The Outlaw is about the complex relationship between seductress Rio McDonald (Jane Russell) and the three men she plays against each other—Jack Buetel (Billy the Kid), Doc Holliday (Walter Huston), and Sheriff Pat Garrett (Thomas Mitchell), who shot the Kid in real life—in the backdrop of a battle with the Indians.

The film is described as "a story of the untamed West. Frontier days when the reckless fire of guns and passions blazed an era of death, destruction and lawlessness. Days when the fiery desert sun beat down avenginly on the many who dared defy justice and outrage decency." It seems like a good film to watch.

For previous vintage ads, see under Labels.
Written by Prashant C. Trikannad at 23:20:00