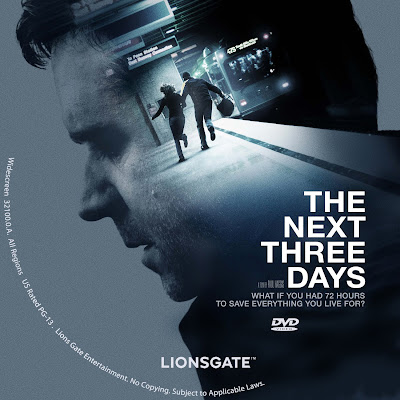 It’s a coincidence that this post about Russell Crowe’s The Next Three Days (2010) coincides with his 49th birthday tomorrow, April 7. It was one of many films I watched on television during my recent leave of absence from blogging. I had never heard of this movie before and when I saw it, on STAR Movies last month, the New Zealand-born actor climbed still higher in my esteem. I’d rate his role as John Brennan, the distraught husband of Lara Brennan (Elizabeth Banks) who is arrested and convicted for the murder of her boss, as one of his best. This is a relative term for one whose performance never fails to captivate the viewer.

Like most actors Russell Crowe has a trademark screen persona: he is niggardly with words, he has a quiet intensity about him, and he is awkward. He is no different in The Next Three Days made by Canadian director Paul Haggis (of Crash, Million Dollar Baby, and Casino Royale fame).

In this film, Crowe’s character, John Brennan, is a family man who loves his career wife Lara and their little son Luke. Everything is fine until one morning when the police swoop down on their happy home and whisk Lara away. She is charged with killing her boss and is sentenced to near life imprisonment in Alleghaney County jail in Pittsburgh, Pennsylvania. The evidence against her is clinching or so we are told. John and Lara await the verdict on the appeal even as their lawyer tells them that there is no hope.

Over the next three years, John raises their son, with the help of his father George Brennan (played by the ageing Brian Dennehy) and mother Grace Brennan (Helen Carey), and teaches English at a local college. Between his personal and professional obligations, John never misses a chance to visit his wife in jail and tell her all about their growing son.

As the months pass into years, emotions run high, tempers flare up, and a depressed Lara attempts suicide. In one poignant moment, Lara, who can’t accept her fate, tells John what if she really did kill her boss. John stares at her in disbelief. On his next visit, he tells her that he knows she didn’t murder the woman and nothing she says will ever make him feel otherwise and vows to get her out.

A large stretch of the film has John planning Lara’s escape from the airtight prison. But, before he carries out his elaborate, and often reckless, scheme, he seeks guidance from Damon Pennington (Liam Neeson), an ex-convict who tells him what he stands to lose…should he, god forbid, fail.

“But before you do anything, you have to ask yourself if you can do it. Can you forget about ever seeing your parents again? Can you kill a guard? Leave your kid at a gas station? Push some nice old lady to the ground just because she gets between you and the door? Because to do this thing, that's who you have to become. And if you can't, don't start, 'cause you'll just get someone killed.”

The Next Three Days, an allusion to the last three days before Lara Brennan is transported to another prison hundreds of miles away, is Russell Crowe’s film all the way. No other actor, not Elizabeth Banks, not Brian Dennehy, nor anybody else, matter in this extraordinary film. You think you know what the end is going to be like and yet you are not quite sure. Not when John Brennan buys a gun for the first time in his life and says, “Show me where the bullets go.”