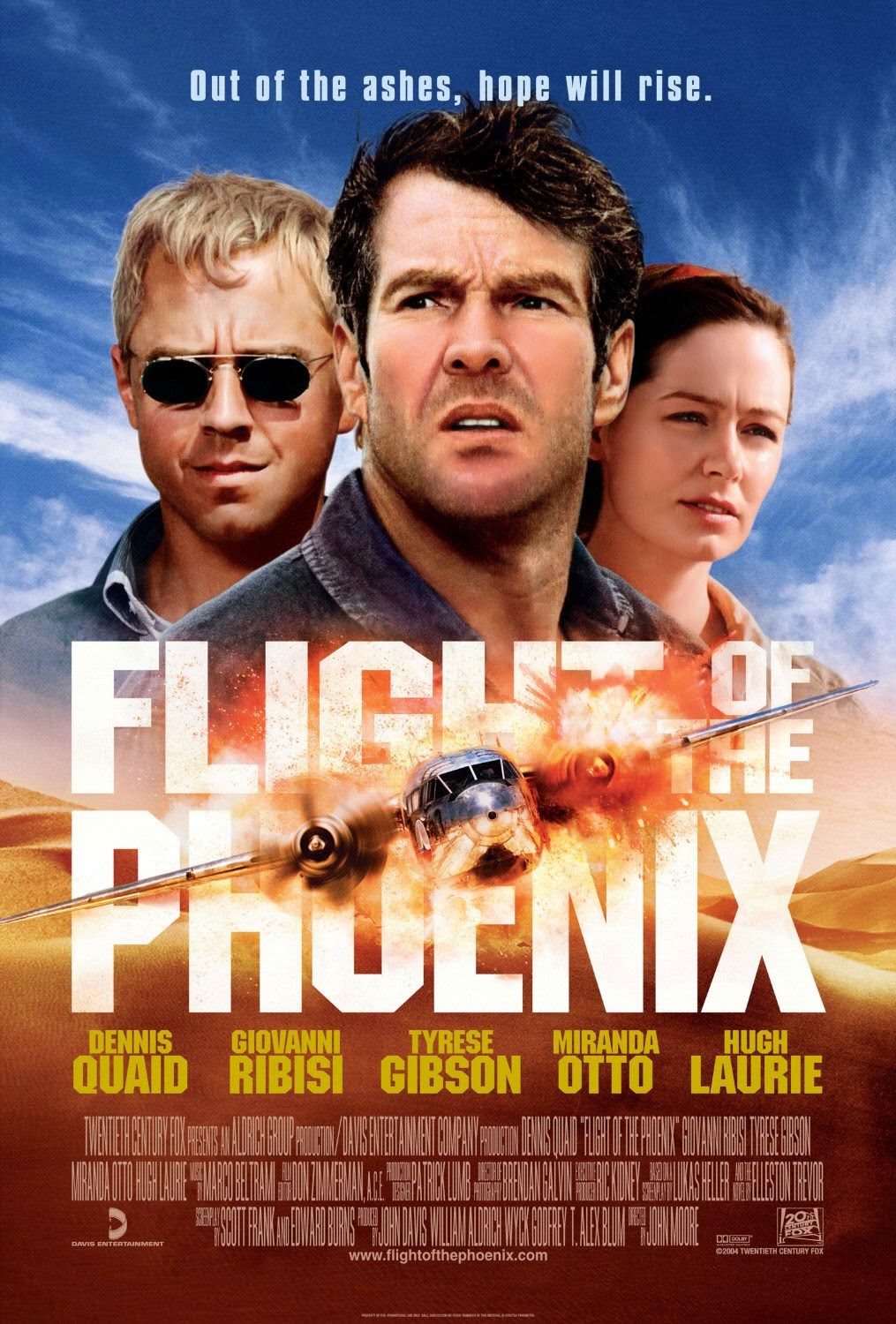 Both films are based on the novel by Elleston Trevor (born Trevor Dudley Smith). I have not read the book.

Stewart and Quaid play the lead character, Frank Towns, the captain of the ill-fated cargo plane that crash lands during a storm in the Sahara Desert in Africa and in the Gobi Desert in Mongolia, depending on which version you've seen.

Frank Towns (Quaid) and his co-pilot A.J. (Tyrese Gibson) are on their way back to civilisation after picking up crew and cargo at an immobilised oil well when a mighty dust storm forces Towns to crash his C-119 Flying Boxcar in the Gobi, somewhere in the middle of nowhere. The plane is at least two hundred miles off course and there are immediate casualties.

Towns is initially indifferent and is reluctant to take charge of the situation, the meagre rations of food and water, and the rudderless passengers, but relents when Kelly Johnson (Miranda Otto), one of the oil workers, pricks his conscience.

What follows next is a lesson in team motivation and management as Towns strives to keep the spirits of his despairing passengers alive on one hand and struggles to protect his restless flock from the vagaries of the desert weather and ruthless smugglers on the other.

How they manage to get out of the desert, which can well be described as last place god made, is what makes this special effects film worth watching even though the plot is so-so. Of particular note is the way Towns brings down the plane through swirling storm and sand, in brief but terrifying moments that an artist or a photographer would capture perfectly on canvas or through a lens. The brilliant tan of the desert sand, caught on camera by cinematographer Brendan Galvin, seems to stretch forever and forms an immense backdrop throughout the nearly two-hour film.

In terms of individual performance, Dennis Quaid’s acting is along expected lines, only his films change. The actor to watch, if at all, is the reclusive Elliott (Giovanni Ribisi), a slightly eccentric design engineer who builds model airplanes. He’s the guy who plays Phoebe’s crazy half-brother in Friends.
Written by Prashant C. Trikannad at 04:51:00