Check out Todd Mason’s blog Sweet Freedom for this Tuesday’s Overlooked Films, Audio & Video. My contribution is a slightly expanded version of a general post on horror movies I wrote two years ago. 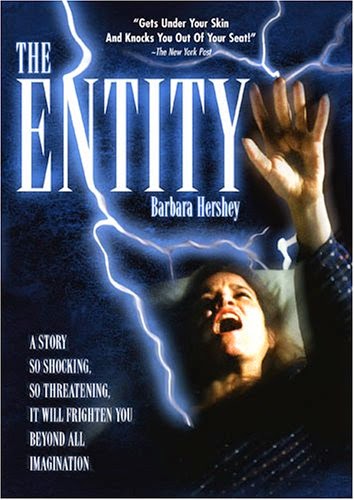 The Entity was one of seven horror movies I watched on VCR in my mid-teens. The others were The Omen and Friday the 13th trilogies, The Evil Dead, A Nightmare on Elm Street, The Exorcist, and An American Werewolf in London. I saw them all in a span of one week between 10 pm and 4 am. I can't think of any other period in my life when I was as scared as I was during that one week. I was glad I saw the horror flicks with many of my family members.

Since then and up to now I must have seen about a dozen horror movies, the last of which was The Amityville Horror (2005) starring Ryan Reynolds and Melissa George. I'm looking for an opportunity to see the 1979 version that has James Brolin and Margot Kidder in the lead. It ought to be better.

The Entity's most frightening appeal lies in the absence of an entity, unlike in The Exorcist. There is something eerie about horror films without graphic apparitions in plain sight. The other attraction is the background music, slow and haunting, that makes you feel as if someone or something is about to reach out and touch you.

Directed by Sidney J. Furie (Superman IV: The Quest for Peace, 1987), The Entity was well received in India because of its unusual supernatural theme and, I suspect, on account of a young Barbara Hershey. I remember many of the scenes from the movie, particularly how her character Carla Moran's sexual molestation by an invisible spirit begins and ends. One evening Carla, a single mother, is sitting at the dressing table when she is slapped by a mysterious hand and thrown on the bed and raped by no one. What follows is a period of mental and physical agony as Carla tries to convince people of what is happening to her. The film ends with Carla daring the evil spirit to do what it wants followed by the door shutting itself, suggesting that the phantom rapist finally leaves her alone…maybe.

I've never bought the theory that The Entity was based on a true story.

Do you have any good, or bad, memories of horror movies?
Written by Prashant C. Trikannad at 05:00:00