The Rome Express by Arthur Griffiths, 1907

I offer this review for Forgotten Books at Patti Abbott’s blog Pattinase as well as my self-imposed challenge to read 1850-1950 vintage books in five categories this year. This is the first of five books in mystery-detective which supersedes spy-espionage for now.

The Rome Express, the direttissimo, or most direct, was approaching Paris one morning in March, when it became known to the occupants of the sleeping-car that there was something amiss, very much amiss, in the car. 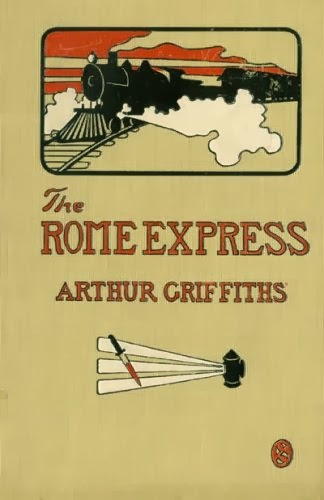 The Rome Express by English author Arthur Griffiths has some of the ingredients of Murder on the Orient Express by Agatha Christie. A man is brutally murdered on an express train, half-a-dozen people of different nationalities are suspects, and the detective investigating the crime seems like Hercule Poirot’s twin. Except for one thing: Griffiths wrote his novel 27 years before Christie wrote hers. Did Christie borrow the idea from Griffiths? We'll never know.

Unlike Poirot who investigates Ratchett’s murder on the Orient Express, M. Floçon, the Chef de la Surêté, or Chief of the Detective Service of the French police, investigates the mysterious death of Francis A. Quadling, a disreputable banker on the run from Rome, after the express train reaches Lyons station in Paris.

Floçon wastes no time in questioning the seven suspects—the beautiful Contessa Sabine di Castagneto, an Englishwoman by birth, and her attractive maid Hortense Petitpré, a Frenchwoman; the upright and indignant General Sir Charles Collingham, an officer in the British army, and his brother Reverend Silas Collingham, a rector in Norfolk county; Natale Ripaldi, a police detective from Rome; and two unknown Frenchmen.

The other passengers in the adjoining cars are allowed to go on the ground that they’d no access to the one in which the murder took place.

In his interrogations Floçon gets a lot of help from M. Beaumont le Hardi, the instructing judge who does as much of the questioning, and a commissary of police, who is at best a mute spectator. Two first inspectors, Galipaud and Block, bungle their way through the field work.

Floçon somewhat resembles Poirot in attire and appearance but not in attitude. I liked Arthur Griffiths’ description of M. Floçon. It says:

“He lived just round the corner in the Rue des Arcs, and had not far to go to the Prefecture. But even now, soon after daylight, he was correctly dressed, as became a responsible ministerial officer. He wore a tight frock coat and an immaculate white tie; under his arm he carried the regulation portfolio, or lawyer's bag, stuffed full of reports, dispositions, and documents dealing with cases in hand. He was altogether a very precise and natty little personage, quiet and unpretending in demeanour, with a mild, thoughtful face in which two small ferrety eyes blinked and twinkled behind gold-rimmed glasses. But when things went wrong, when he had to deal with fools, or when scent was keen, or the enemy near, he would become as fierce and eager as any terrier.”

The French detective is overzealous in his frantic effort to nail the murderer, to the extent that he accuses nearly all the seven people of committing the crime. A mere word or two from someone is enough for the Chief of the Detective Service to zoom in on a suspect, as he does in the case of the countess, her maid, the general, and the Roman officer, often with hilarious results. His accusations swing from one suspect to another like a pendulum.

In the end General Collingham, who is smitten by Contessa Castagneto, saves the day, and much embarrassment, for Floçon, as he perceives a trail of blackmail involving the Italian detective Ripaldi and correctly reasons that the murdered man is not Quadling, the banker.

Final word
The British like poking fun at the French and Arthur Griffith does in ample measure in his delightful novel which is laced with French and Italian exclamations. He has portrayed the French police as a bunch of nitwits who can’t do their job right. For instance, when the general learns that the countess has been arrested, he blurts out, “I don't believe it! Not from these chaps, a pack of idiots, always on the wrong tack! I don't believe a word, not if they swear.”

The Rome Express lacks the suspense and seriousness of Murder on the Orient Express but makes up with a dose of unintended humour through the antics of Floçon and his investigation. Except for the French detective, the other characters are quite ordinary. In short, a nice and light read.

The book is not to be confused with the 1932 film Rome Express by Walter Forde and starring Esther Ralston and Conrad Veidt. The story, by Clifford Grey, an English songwriter, actor, and Olympic medalist, takes place on the train and revolves around a valuable painting that is stolen.

About the author
Arthur Griffiths (1838-1908) was an inspector of prisons and author who has published over 50 books. He is believed to have descended from a long line of military men and served as a Second Lieutenant during the Crimean War in mid-19th century. His books include both fiction and non-fiction, notably The Passenger from Calais, Mysteries of Police and Crime: A General Survey of Wrongdoing and Its Pursuit, The Mediterranean: It’s Storied Cities and Venerable Ruins, The Thin Red Line, Life of Napoleon, Victorian Murders: Mysteries of Police and Crime, In Old French Prisons, and In Spanish Prisons: The Inquisition at Home and Abroad, Prisons Past and Present, among many others.
Written by Prashant C. Trikannad at 03:53:00