Spielberg matches Georges 'Hergé' Remi
in The Adventures of Tintin 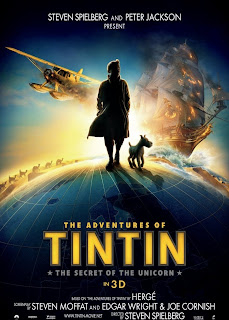 A little over twenty-four hours after The Adventures of Tintin: The Secret of the Unicorn was released in India, Friday, November 11, I stood in the queue to buy tickets for the 9 pm show. It was a weekend and the queue at the local cinema hall was long and threatened to spill from the lounge on to the street outside—there were four people between me and the ticket counter that was tantalisingly within reach. They seemed like forty! My patience on the boil, it was nearly a half-hour before I made it to the counter and walked away with four tickets from the final lot, fourth row from the screen. If you're a Tintin fan, you'll know what that's like.

"It's all right...it's in 3D so the closer you're to the screen the better," my daughter assured me. I wasn't convinced.

It didn't matter really because Steven Spielberg had me (and I suspect nearly everyone in the packed hall) eating out of his directorial hands from the word go. Everything about Spielberg's maiden animation film is a comic-book page turner—the animated graphics, the special effects, the characters, the story, and the sound. He has Tintin by the tuft of his red hair and his audience pretty awestruck behind their 3D glasses.

Spielberg has based The Adventures of Tintin on three of Hergé’s comic books—The Crab with the Golden Claws (1941), where Tintin first meets a drunk and imprisoned Captain Haddock, and The Secret of the Unicorn (1943) and its sequel Red Rackham's Treasure (1944), where Tintin (Jamie Bell) and Haddock (Andy Serkis) solve the mystery of the Unicorn, the ship that his ancestor, Sir Francis Haddock, was forced to blow up 300 years ago to save his treasure from the pirate Sakharine.

In sinking the ship, Sir Haddock is reckless but he is not daft. He leaves behind clues in three separate scrolls which are hidden in three models of the Unicorn, one of which Tintin happens to buy in a flea market. This is where the story begins: the pirate Sakharine's descendant, Ivanovich Sakharine (Daniel Craig), is desperate to get hold of Tintin's model which contains the second of the three scrolls and even kidnaps the Belgian reporter. While Sakharine already has the first scroll, the third is hidden in a bullet-proof glass case belonging to a sheikh in Morocco.

In the end, though, Tintin and Haddock with a lot of help from Snowy foil Sakharine's evil plans and discover the treasure has been lying at Marlinspike Hall, the Haddock estate, all along.

The movie is a precise reflection of the comic books except for the part where the two descendants, Haddock and Sakharine, fight each other with giant cranes unlike their ancestors who fought with swords on a burning ship. The analogy is striking. It also has several original elements from the comic books, such as the antics of the bumbling detectives, the Thom(p)son Twins; the unsuspecting Milanese Nightingale whose soprano voice shatters the sheikh's glass case (Sakharine's idea and a Spielberg invention); the treachery of Captain Haddock's first mate, Allan, on board his dark and foreboding vessel Karaboudjan; Tintin and Haddock's escape from the ship on a lifeboat; their subsequent daredevil flight on the enemy's amphibious aircraft and trek through a scorching desert; and Nestor, Haddock's butler at Marlinspike Hall.

A few other things stand out in the film: Snowy's quick-thinking and his faithfulness towards his master, Tintin; Captain Haddock's fondness for alcohol, particularly whisky, and for cuss words, "Blistering Barnacles!" and "Thundering Typhoons!", their attires—blue-eyed Tintin in his all-too familiar white-collared blue shirt, plus fours and trench coat and craggy-faced Haddock in his equally familiar navy-blue cap, turtle-neck sweater with an anchor etched on it, jersey and slacks; the Thom(p)son Twins in black suit and walking sticks; and the appearance of Tintin creator Georges ‘Hergé’ Remi in an artistic cameo. I suspect Spielberg borrowed the idea from Stan Lee’s cameos in the Marvel films.

The final scene in the movie—where Tintin and Haddock discover Sir Francis Haddock’s hidden booty in a secret basement at Marlinspike Hall—is actually the final scene in the sequel Red Rackham’s Treasure which, as we know, takes the Belgian reporter and his newfound friend on an exciting adventure—the hunt for Sir Francis Haddock’s treasures buried at sea—with Professor Cuthbert Calculus and his pendulum in tow.

Tintin reminds Haddock about the scuttled ship and ever so subtly lets us in on what could well be Spielberg’s next Tintin adventure. Hopefully, he will stick to the comic-book script, as he did in this film. When it comes, though, I’m going to jump the queue. Highly recommended.

The Adventures of Tintin poster: © Paramount Pictures and Columbia Pictures
Written by Prashant C. Trikannad at 09:23:00