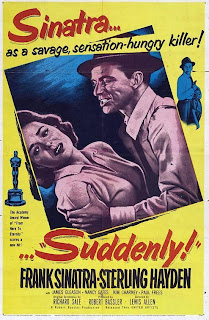 "Don't...please," are the last desperate words of John Baron (Frank Sinatra) as widow Ellen Benson (Nancy Gates) and love-interest Sheriff Tod Shaw (Sterling Hayden) shoot Baron to stop him from assassinating the US President who is passing by train through the small town of Suddenly in California.

Baron is a hired assassin without a political agenda of his own – he kills for pleasure and for a smart fee. As Baron tells his hostages who, apart from Ellen and the Sheriff, include her son Pidge (Kim Charney), her father-in-law Pete 'Pop' Benson (James Gleason), and TV repairman Jud (James O'Hara): "The thing about killing you or her or him is that I wouldn't be getting paid for it and I don't like giving anything away for free." Baron kills, all right.

The psychopath in assassin's disguise and his two henchmen pose as FBI agents and enter Ellen's home facing the train station, a perfect site for the ambush.

When the Sheriff warns Baron of the potential risks and consequences of assassinating the President, Baron shrugs it off saying who and why he kills are the least of his worries.

"Tonight at five o'clock I kill the President. One second after five there's a new President. What changes? Nothing!" Baron lays it out for the Sheriff.

Sheriff Tod Shaw says, "Don't play God just because you have a gun." To which, Baron replies, "You know when you have a gun you are in a way sort of a god. If you had the gun then you would be the god."

At one point when Ellen asks Baron if he didn't have any feelings, he retorts, "No, they were taken outta me by experts."


Baron proves that he is a psychopath when he kills Jud in cold blood and knocks out Pop Benson before Ellen and Jud shoot him as he takes aim through the sniper rifle mounted beside the window facing the train station. The President’s train passes by but does not halt, the local police having alerted the FBI and the Secret Service of the imminent ambush. Baron goes down pleading "Don't... please." He dies a coward in the end.

Directed by Lewis Allen in 1954, Suddenly is perhaps one of the earliest films with a plot to assassinate the US President. As I watched it on TCM, Sunday, November 20, I couldn’t help admire Sinatra’s ability to portray the bad guy as convincingly as he plays the good guy. However, the tagline “Sinatra…as a savage, sensation-hungry killer!” just doesn’t fit in with the singer-actor’s image as we know it. You expect him to come good even as he pulls the trigger on Jud and wallops Pop Benson on the head.

He’s trying to tell the audience, “Look, I don’t want to do this but I can’t help it.” Frank Sinatra will live to see another day.
Written by Prashant C. Trikannad at 11:27:00