Beyond Deep Blue: Chess in the Stratosphere

Based on a press release from www.springer.com 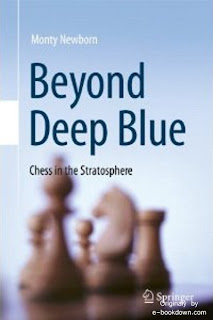 More than a decade has passed since IBM's Deep Blue computer stunned the world by defeating Garry Kasparov, international chess champion. Following Deep Blue's retirement, there has been a succession of better and better chess-playing computers, or "chess engines," and today there is little question that the world's best engines are stronger at the game than the world's best human players.

The new book Beyond Deep Blue: Chess in the Stratosphere by Dr. Monty Newborn tells the continuing story of the chess engine and its steady improvement from its victory over Garry Kasparov to ever-greater heights. The book provides analysis of the games alongside a detailed examination of the remarkable technological progress made by the engines-asking the questions, "Which one is best?" "How good is it?" and "How much better can it get?"
The book:
* Presents a total of 118 games, played by 17 different chess engines, collected together for the first time in a single reference.
* Details the processor speeds, memory sizes, and the number of processors used by each chess engine.
* Reviews Deep Blue's matches with Garry Kasparov in 1996 and 1997.
* Includes games from 10 World Computer Chess Championships, and the three most recent major computer chess tournaments of the Internet Chess Club.
* Covers the man-machine matches between Fritz and Kramnik in 2002 and 2006, and between Kasparov and Deep Junior in 2003.
* Describes three historical matches between leading engines: Hydra versus Shredder, Junior versus Fritz, and Zappa versus Rybka.
This fascinating account of the ongoing evolution of computer chess will appeal to both the general reader and to specialists in artificial intelligence and computing. Chess players and aficionados will also appreciate this remarkable insight into the new superstars of the classic game.
Dr. Monty Newborn is an emeritus professor in the School of Computer Science at McGill University, Montreal, Canada. He is the author of the successful Springer titles Automated Theorem Proving: Theory and Practice and Deep Blue: An Artificial Intelligence Milestone.
Source: www.springer.com/about+springer/media/pressreleases?SGWID=0-11002-6-1164321-0
Written by Prashant C. Trikannad at 01:30:00