With Great Truth & Regard: The Story of the Typewriter in India, 2016 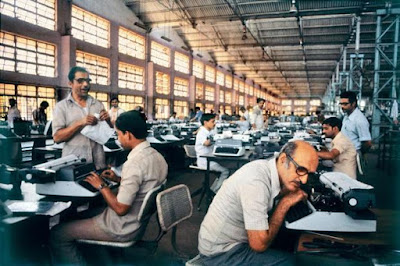 I wrote my first story on a Godrej typewriter. It was an interview with former playback singer Preeti Sagar. The Q&A appeared in Free Press Bulletin shortly after I joined the tabloid as a reporter in the mid-eighties. Until then, I had only been editing stories on India’s first homegrown typewriter, which, in many offices, occupied a large portion of a Godrej horizontal desk and sat next to a Godrej vertical cabinet. In those days, Godrej was synonymous with office furniture.

Long before that, I cut my teeth on portable typewriters. I learnt to change the ribbon and roll foolscap paper on Brother, Smith Carona and Remington that my father and uncle owned. Both were journalists and between them they had a top speed of nearly 200 words per minute. Cigarette between lips, they pounded away at their portables and delivered clean copies for the next day’s edition. You could hear them speed typing in the newsroom from quite a distance. It was, no doubt, music to the ears of editors with stubborn deadlines.

A year before I took up my first newspaper job at Free Press Journal Group, I enrolled into a typing and shorthand institute where I learnt the rudiments of ten-finger typing on Godrej machines, beginning with the home or middle row—‘asdf’ with the left hand followed by ‘;lkj’ with the right. I found it tedious. A month later, I was back to rapid two-finger typing. It was an insult to the typewriter. But that’s how I type to this day. 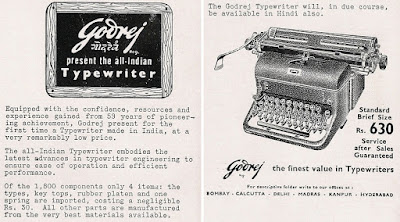 And that’s just the tip of the iceberg of memories that came back after I read With Great Truth & Regard: The Story of the Typewriter in India edited by senior journalist and author Sidharth Bhatia. It resonated with me because of my experience with this unwieldy machine that made writers and letter writers out of so many of us. The 304-page well-illustrated hardback chronicles the long and rich anecdotal history of the manual typewriter, from the time industrialist Naval Godrej pioneered the first all-Indian typewriter in 1955 to its inevitable death by computers in 2011. The company stopped production that year, though you can still find old working typewriters outside courts, at street corners, and in small towns.

As Jamshyd N. Godrej, son of Naval Godrej and CMD of Godrej & Boyce, notes in his Foreword, “The book captures the story of typewriters in India from many perspectives, including the socio-economic perspective, which is about the impact typewriters had on the Indian masses. It is also about the contribution typewriters made to bring women into offices in larger numbers—a huge step forward for their empowerment in India.”

The Godrej typewriter, a complex machine with 2,000 high-precision components, was one of post-Independent India’s earliest instances of self-reliance in manufacturing. It was testimony to a young nation’s capability to mass-produce an indigenous typewriter and take on established foreign brands like Remington, Underwood, and Imperial. And it came 60 years before the government launched its ‘Make in India’ initiative. 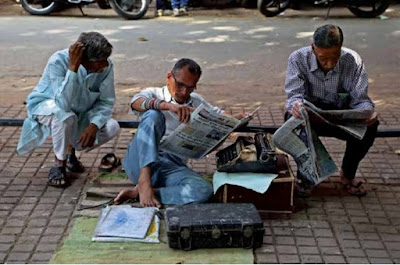 “The story of the Indian typewriter is more than just a matter of manufacturing a piece of office equipment; it is the story of one man's dogged determination to make a machine that would compete against the world's best. And most of all, it is part of India's own goal of becoming self-reliant,” Bhatia writes in his engaging piece titled Making the Indian Typewriter: The Godrej Story.

An entire generation of people across cultures and communities—from the office stenographer to the court typist and from the public librarian to the newspaper editor—broke their backs and built their careers on the typewriter. There was no social barrier to using the machine. The typewriter was an equaliser. It defined the Indian workplace more than any other office device. In nearly every commercial enterprise or government office someone or other hunched over a typewriter, either typing from a handwritten document at the side, winding a new spool and occasionally making a mess of it, or rubbing out lines with a circular ink eraser and tearing a hole through the paper. It was both frustrating and satisfying.

The typewriter sat on the office desk or a roadside table with a degree of self-importance. Over tea and gossip, it did many things at once—it told stories, dictated letters, made rules, typed affidavits, hired people, balanced accounts, prepared invoices, and wrote out inventories. It was also privy to all kinds of information, including secrets and lies. If the typewriter could talk, I suspect, it would have strained ties and damaged relations among peoples and societies. But noisy as it was, the typewriter remained a mute spectator throughout its eventful existence. 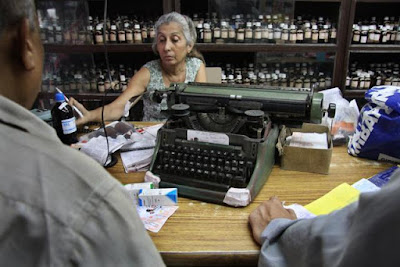 With Great Truth & Regard is a nostalgic throwback to a time when typewriters influenced and shaped ordinary lives. It is an evocative collection of memories, essays, observations, short accounts, and titbits about a 20th century innovation that users took for granted. No one really expected the typewriter to all but vanish. After all, it had achieved so much in the sphere of communication, employment, socio-cultural diversity, including film and television, and women emancipation.

Launched on December 2, 2016—to commemorate the birth centenary of Naval Godrej (1916-2016)—the volume contains personal narratives by eminent Indian writers, historians, journalists, and social commentators. It is not just a tribute to Godrej typewriters but a testimonial to all typewriters in India. Some of the chapters that I particularly enjoyed were The Rise of the Indian Typewriter, South India's Relationship with Typing, The World of Steno Stereotypes, The Shift from Typewriters to Computers in Journalism, Writing the Script of Life: The Typewriter in Hindi Cinema, and The Immortal Typewriter. It is further enriched by dozens of photographs by Chirodeep Chaudhuri. The vintage illustrations and advertisements of typewriters tell their own story.

If you worked on typewriters, then this book will take you down memory lane. And if you did not, you can still enjoy reading about one of the great utilitarian devices of the 20th century and see what you missed. At 300-plus pages, I felt the book was a tad long but I suppose that bit can be overlooked given the fond memories the typewriter evokes.

Now, the "Backspace" has long replaced the "xxxx" but I would like to think that a part of the manual typewriter still lives on in the keyboards we use today. 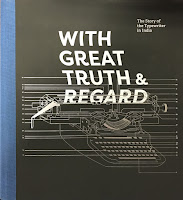 
Note: All images are sourced from the book.