There are many reasons why we return to an author we have read before. What compels me to read the same writer again is the writing itself. For this reason I read Anthony Trollope’s Autobiography twice. Even now I flip through the book and marvel at the lucidity of prose. George Bernard Shaw’s writing had a similar heady effect on me. 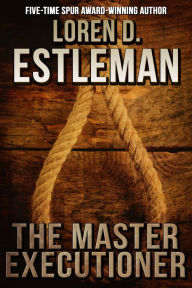 Several modern writers do that as well. Loren D. Estleman, author of detective and western fiction, is one. I was impressed by his narrative flair in Gun Man (1985) and Bloody Season (1987). It was simple and yet stylistic.

I have been meaning to read more by Estleman and an opportunity presented itself this evening, when I came across The Master Executioner on a book website. I read the synopsis and liked it instantly. He has written about a part of the Old West I'm not familiar with—hangman and hanging—a form of capital punishment that still prevails in countries like India.

Here is what the American Library Association had to say about the book:

“Oscar Stone accepts a temporary position building a gallows in Topeka, Kansas, where he meets Fabian Timothy Rudd, a hangman of some repute. Rudd is impressed with Stone's carpentry skills and pride in his work and so takes on the role of mentor as Stone becomes a kind of apprentice hangman. But no one loves a hangman, including his wife, who can't live with her young husband's career choice. Stone travels through the West with Rudd from execution to execution, drinking to dull the isolation and refining his skills. Miscalculations can lead to strangulation or worse: a beheading. Decades pass, and Stone has a final meeting with the wife who left him and learns a terrible truth. Estleman has created an unforgettable character in Stone. Swept up by circumstance and an unwanted gift for dispensing death, he's unable to break away from his life's fated path despite the loss of all he holds close. A dark, compelling journey into a previously unexplored facet of the Old West.”

I downloaded the 272-page Kindle edition for Rs.64 ($0.91) and plan to read it next month. It has a nice biographical sketch of the author and this opening line—“It occurred to Anders Nilsen that if it weren't for having to wait at the train station he would be quite contented to remain both a deputy sheriff and a Methodist.”

On the face of it, the opening sounds innocuous but it was enough to make me curious. I want to read further and see where Estleman is taking me. I'm sure he won’t disappoint.
Written by Prashant C. Trikannad at 11:02:00