Today is Holi in India, the ancient Hindu religious festival also known as the spring festival and, more popularly, as the festival of colours or the festival of love. People light a bonfire the previous night and step out on to the streets next morning to smear and bathe each other in a riot of dry and wet colours, and sing and dance and make merry. I stayed indoors, as I do every year, and used the public holiday to do something useful, like writing this review for Friday’s Forgotten Books over at Patti Abbott’s blog Pattinase. 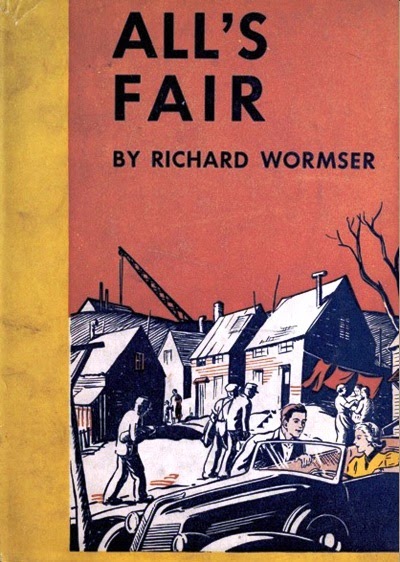 “We want you to go in there," the scarred man said, "and find out who killed young Gowan. Why, how, everything. But you'll have to work undercover.”

Before I get down to my brief review of All’s Fair…, here’s a word about the New York-born author. Richard Wormser (1908-1977) has claimed to have written seventeen Nick Carter magazine stories during 1932-33. I have never read Nick Carter as a pulp fiction private detective who made his debut in 1886. I have only read his latter-day adventures as an AXE spy called Killmaster.

The novella All’s Fair… is about young MacBlair who travels from one mining county in California in the West to another in Ware County in the East ostensibly to learn how labour is taken care of and how miners are handled.

“They got a right to know about unions. So we sent this man in. Told him to play it easy, avoid the rough stuff. Hell, it's fertile ground there!

In reality, Mac is an organiser and a troubleshooter. He has been sent all the way to Ware County by union leader Lawrence to find out who killed his son, Gowan, and help bring the killer to justice.

The brave and feisty Mac operates undercover, disguised as the son of a fictitious mine owner in the west.

In Ware County, he encounters big old John Alastair and old Harford Rand, two rich and powerful mine owners who run the county with an iron hand. They are backed by corrupt deputies, foremen, and spies who help them keep a tight lid on union trouble.

Mac stays with the Alistairs who believe he is, in fact, the son of a fellow mine owner on a study tour, and enjoys their hospitality. Openly, he learns their mining ways; secretly, he investigates Gowan’s murder.

It’s not long before Mac falls in love with blue-eyed Sue Alastair who discovers his identity and the purpose of his visit to Ware County. She surprises Mac by revealing she is on the side of the miners.

The Mac-Sue love story, subdued as it’d seem, is soon overshadowed by the miners who, led by Lawrence, now in their midst, strike work. Sue is kidnapped but safe. And Mac finds himself in the crossfire between the mine owners and their gun-toting henchmen on one hand and the striking mine workers on the other.

In spite of its fast pace, All Fair’s… is a moderate story about mine owners and their treatment of mine workers. It’s all quite atmospheric, in fact, and probably reflective of the state of union labour and the condition of miners prevalent at the time. I agree with the description that “It is more than a stirring love story” and that “Its setting is a turbulent mining county where money and corrupt politicians rule with guns” into which Mac walks to solve a murder. No single character, not even Mac's, stands out which doesn't make this novella any less readable.

“Yeah?” One-eye sneered. “And me, I’m from the moon. What the hell, have the conservative unions gone in for boring from within now? I thought they left that to us?”

Judging from All’s Fair…, Richard Wormser, I suspect, knew a thing or two about the mining business and how it worked. At times I felt the novella read like a western for there were shades of it.

The author
Richard Edward Wormser wrote pulp and detective fiction, screenplays, and westerns, some of it under the pseudonym of Ed Friend. He is believed to have written 300 short stories, 200 novelettes, 12 books, and even a cookbook titled Southwest Cookery or At Home on the Range. He was fairly known for his Nick Carter stories. His two murder-mystery novels are The Man with the Wax Face and The Communist's Corpse. I’m interested in reading his pulp fiction.
Written by Prashant C. Trikannad at 05:37:00