The indefatigable Todd Mason has all the links to yet another edition of Overlooked Films, Audio and Video at his blog Sweet Freedom.

Hogan (Clint Eastwood): “See, I spent two years in a war in the States. Right now, all I'm interested in is money.”

Sara (Shirley MacLaine): “If money is all you care about then why did you fight in that war?”

Hogan: “Everybody's got a right to be a sucker once.” 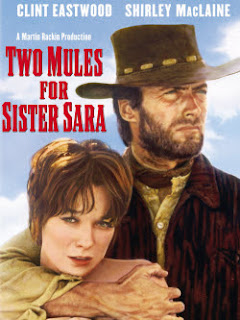 In Two Mules for Sister Sara, Hogan (Clint Eastwood) becomes a sucker twice when he discovers that the “nun” he rescues from being raped by three Mexican bandits is actually a prostitute.

He suspects the whiskey-drinker, cigar-smoking, badmouthing Sara (Shirley MacLaine) to be more than a devout member of the order of the nuns, but he doesn't find out she is a whore until the end.

Sara flashes her shining cross and invokes the lord’s name so often that it leaves “Mr. Hogan” nonplussed throughout their comic adventure across the border.

Hogan: “I'll say one thing, Sister. I sure woulda liked to have met up with you before you took to them clothes and them vows.”

By then, Hogan and Sara, as unlikely a pair as you’ll see on a horse and a donkey, succeed in their mission of joining hands with Mexican rebels led by Col. Beltrán (Manuel Fábregas) and overrunning a fort occupied by the French, with plenty of gunfire and dynamite.

Hogan, an opportunistic drifter, agrees to help the rebels for half the share of gold hidden in the fort. En route to the rebel camp, he comes across Sara and the bandits. He rescues the nun stripped off her habit and shoots her molesters dead. It doesn’t take long for Hogan and Sara to hit it off: they take an instant liking to each other and become good friends, with Hogan’s suspicions of her true identity lurking not far behind. 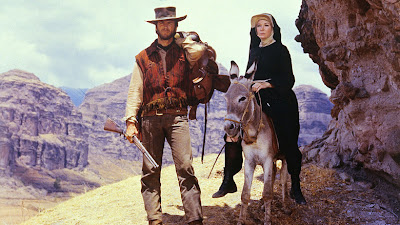 I enjoyed Two Mules for Sister Sara for several reasons.

1. It confirmed my belief that Clint Eastwood, the unshaven, rugged and unassuming western hero, looks good as a cowboy on a horse; better than most of his contemporaries did. He was born to play the part with cowboy hat, neck scarf, poncho, six-gun, cigar, drawl, grimace, and all.

2. The film is a light comedy laced with tongue-in-cheek humour throughout its hour-plus length. By the time I was through watching the film, I was wondering if I had seen a western or a romantic comedy. Sample this:

Hogan: “Did I or did I not hear you call me a bastard?”

Sara: “Well! I suppose whiskey can make a man hear anything. Oh, Dear Lord, forgive him for the impurity of his thoughts!”

3. The original score by Italian composer Ennio Morricone who also gave us the memorable music for spaghetti westerns like The Good, the Bad and the Ugly. Love the beat.

4. In one scene, Hogan drinks himself to death, nearly, to numb the excruciating pain he is about to feel as Sara pulls out the arrow shot into his left shoulder by the Yaquis, I think the Mexican variant of the Indians. Check out the ingenious way in which Hogan tells Sara to remove the arrow. 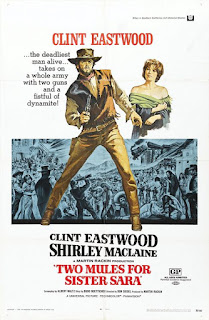 I could go on some more but that would spoil the fun. In Two Mules for Sister Sara Eastwood is as Eastwood does in all his westerns, larger than the film and yet inconspicuous in the saddle. MacLaine is not new to a tart’s role: she is as natural as Sara as she is as Irma la Douce. What I liked about this film, in addition to their performances, was the novelty of dialogue between Hogan and Sara.

Don Siegel shot the film entirely in , most of it on location, capturing the country and the village life in all its naked reality, common to all the spaghetti westerns.

Clint Eastwood owes his success as a western hero in large part to Don Siegel and Sergio Leone. In a fascinating interview with James Lipton on Inside the Actors Studio, Eastwood recounts how he accepted the challenge of working in the first non-American western A Fistful of Dollars co-produced by the Italians, the Spanish, and the Germans that gave the world the unforgettable Man With No Name.
Written by Prashant C. Trikannad at 03:11:00