Over the next three days, I will be covering an international expo and conference on construction equipment and machinery in Mumbai. The mighty machines are good to look at and photograph. Meanwhile, here’s a review of two war films that Zero in on a common theme, for (not exactly) Overlooked Films, Audio and Video at Todd Mason’s blog Sweet Freedom.

Yesterday, December 7th, 1941—a date which will live in infamy—the United States of America was suddenly and deliberately attacked by naval and air forces of the Empire of Japan.
— President Franklin Delano Roosevelt in his Day of Infamy speech to a joint session of Congress, a day after attacked the Pearl Harbour Naval Base in .

Tora! Tora! Tora! is a realistic docudrama about the events before, during and after the Japanese attack on . In contrast, is a love story dramatised around the events of that fateful day.

I saw veteran director Richard Fleischer's Tora! Tora! Tora! some 30 years ago, in an old, rundown cinema hall called El Dorado in the tourist haven of Goa, on the west coast of . Except for one scene, I don’t remember anything about this film. In that scene a Japanese torpedo snakes its way just beneath the earth, past a tall tree, still standing, towards men and women who jump out of its explosive path. This could yet be a sketchy recollection. I need to eat almonds.

I certainly don't remember the roles played by the fine cast of Martin Balsam, Joseph Cotten, James Whitmore, and Jason Robards. But I do remember enjoying the film a lot.

Then, last evening, I watched the final leg of ’s Pearl Harbour, which I had previously seen in two sessions (way I usually watch movies on television). The love tangle of Rafe (Ben Affleck), Evelyn (Kate Beckinsale) and Danny (Josh Hartnett) on one hand and the Rafe-Danny friendship on the other does little to elevate the film even though the two related elements are the pivots around which the Japanese bombing of the Harbour takes place. The historical event, which forced to enter the war, seems like happenstance. 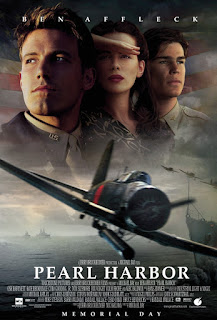 What lifts above plot mediocrity is the special effects that make it a visually stunning film, in particular the destruction of the naval base and the US Pacific Fleet by modified torpedoes dropped from the air. In one memorable scene, a warship is shown tilting on its side before turning turtle and taking much of the crew with it. As we see in Titanic (1997), here too sailors slide down the broad deck of the ship and thrown overboard, into the burning sea.

A film like , with its historical import, does not require a review; a few observations will suffice. Here are some of mine…

1. I thought Jon Voight made a very good President Roosevelt in the wheelchair. The resemblance is striking. Voight’s FDR is shown smoking a cigarette though I haven’t seen pictures of the real New Deal president smoking one. I know he smoked.

2. One of the things that I don’t like about films is the jingoism built into the plot of a film associated with war or an alien invasion. In this film, for instance, Rafe and Danny’s boss, Lt. Col. James Doolittle (Alec Baldwin), mouths lines to stir patriotic fervour among his motley crew of pilots flying to their death. I thought some of his lines were inane and served little purpose. But then, this is and has a right to be super-patriotic. Towards the end Doolittle, Rafe, Danny and some of the survivors salute smartly in what I felt was an overdose of salutes.

Incidentally, General James Harold “Jimmy” Doolittle was an American aviation pioneer and a lieutenant colonel in the USAF during WWII. He was assigned to Army Air Forces HQ and led 16 B-25 bombers on a secret mission to bomb targets in Japan. Spencer Tracy also played Doolittle in Thirty Seconds Over Tokyo (1944).

3. Apparently, Baldwin’s portrayal of the distinguished general created a furore among those who knew Doolittle. I can partly see why. He appears out of sorts as the commander of a task force out to avenge the attack. He looks as if he is on a picnic. The depth and intensity of the character, in the backdrop of the horrific invasion, is missing. In fact, he looks little different from his character in It’s Complicated (2009) where he woos ex-wife Meryl Streep.

4. Petty Officer Dorie Miller (Cuba Gooding Jr.) has a bit role in the film. In spite of graduating from the academy, he is assigned a cook’s job. When his ship is attacked and his mates fall around him, an enraged Miller grabs hold of an anti-aircraft gun and downs a couple of Zeros — “Yeesss!”


Of the three main actors, only Hartnett shows intensity of character. Affleck and Beckinsale are rather expressionless. Their ordinary love story apart, Pearl Harbour scores high for its historical value and special effects, as does Tora! Tora! Tora!
Written by Prashant C. Trikannad at 09:54:00