When it’s time to sell your comics 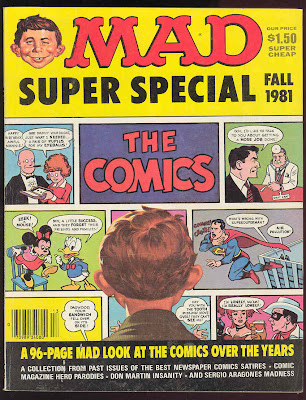 Would you still be a comic-book fan if you woke up one morning and decided to sell your entire collection of comics? Well…umm…yes; then again...maybe not. There are always two ways of looking at something and comics are no exception to that rule.

I suppose you will always cherish comics even if they no longer occupy pride of place in your dusty attic; and yet, it’s your sweat-of-the-brow collection that singles you out as a comic-book fan, in a crazy sort of way. Without your carton of comics you are incommunicado in the comics universe. A world without pictures, dark and foreboding.
And so it was with a lot of anguish that I read on the internet about one Jason Neale's ill-advised decision to sell his 4,000-odd collection of comics built over 25 years (see link below).
My first thought was: You’re crazy! You can’t do that!! No one does that to comics!!!

So what has driven Jason to find foster homes for his poor old comic books? “A family and a change of priorities,” says Jason, who is hoping to make a neat pile of around $4,500 (nearly Rs.2 lakh) from selling his soon-to-be-orphaned comics through online auction.

Different people have different priorities like family, health, job, religion, wealth, and relationships. You can add a dozen more to that list and you still won’t find comics anywhere near, unless you start bottom up. Or, better still, join the comic-book industry for then it becomes your job and a priority and no wife and kids can shake your comics off you.

In this case, though, a family does call for a change of priorities and $4,500 is a heck of a lot of money. In India, Rs.2 lakh is retirement benefit.

But, it’s one thing to sell comics purely as an investment (you might as well sell underwear), it’s another to be a diehard comic-book fan and have to sell it, especially if you don’t want to, especially if…

Jason’s dilemma is every CB fan’s dilemma: if he holds on, he loses; if he sells, he still loses. Figure it out.

Do we detect a hint of sadness when he says, “It’s saying goodbye to an old friend. I spent many years actually searching for this collection....It’s been a big part of my life.”

It’s a big part of many other lives too. I once lost some prized Phantom comics to thieving termites (I hate termites). A friend of mine lost his entire lot to flash floods (he hates rains). His friend lost his collection to space invaders (and he hates aliens). It’s a fate worse than selling comics and making money and buying more comics.