The magic of comics 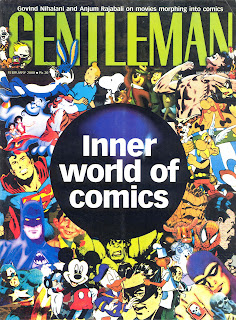 “An entire magazine devoted to comics! Who’s going to read it?” Friends and colleagues were sceptical that an intellectual magazine which went far beyond the scope of its tagline ‘Mindspace for Men’ could sell on a childhood passion, one that most men usually outgrow by the time they walk into their first job and out of their first marriage—comics.

And yet, Gentleman magazine, last published by Express Publications (Madurai) Ltd until 2001, turned the February 2000 issue on its head by dedicating 60-odd pages to comics and comic strips, and little else. Titled Inner World of Comics, it was, and probably is, the only magazine in the world to do so.

The criticism, mild as it was, seemed justified. After all Gentleman wrote extensively on such cerebral topics as books, music, art, cinema, food, and poetry among other heady addictions. Well-known writers and critics worked on cover themes with a lot of fun and passion, be it science fiction, essential listening, horror stories or underrated movies.

But why comics? No particular reason except that two comic-book fans who were passionate about comics (and I believe still are) decided it was time Gentleman got its own speech bubble, and a big one too.

The believe-it-or-not issue was put together by senior journalist and then editor Premnath Nair and this blog writer with handsome contributions from noted writers and poets like Adil Jussawalla, Farrukh Dhondy, Boman Desai, Rafique Baghdadi, Pradeep Sebastian, Devangshu Datta, Ajoy Alexander, and yes, the late Anant Pai, the father of Indian comics and creator of the fabled Amar Chitra Katha (Immortal Picture Stories).

Inner World of Comics was a veritable who’s who of the comic book universe beginning with The Yellow Kid, the first-ever comic strip. Almost no one was left out, at least not intentionally, and all the major league comic book characters were in.

Come to think of it, there was more to Inner World of Comics. In some way we rekindled our long-forgotten inner world too.

As writer-columnist Farrukh Dhondy concluded in his article Childhood Pleasures, “Books were longer to squeeze satisfaction out of. Films were still not accessible. Coca-Cola was unaffordable, chewing gum was forbidden, making eyes at the dhobi’s girl was the closest one got to sex, and TV hadn’t come to India. There was playing with the dog, Dara’s Meccano set, marbles, throwing stones at tamarind trees, reading comics…”
Written by Prashant C. Trikannad at 10:51:00