The White Fruit of Banaldar by John D. MacDonald, 1951

An interesting story with a twist in the tail for Friday’s Forgotten Books at Patti Abbott’s blog Pattinase.

The auctioning of the five planets marked the end of one part of life, the beginning of a new, for Timothy Trench.

The White Fruit of Banaldar is a science fiction tale by John D. MacDonald and was published in the September 1951 issue of Startling Stories. It is about man’s curious nature and his innate desire to posses the very thing that is out of his reach.

Timothy Trench is a tall, young man with an entrepreneurial streak. He wants to buy the planet of Banaldar that his former employer, Transgalactic Development, is putting up for auction along with four other planets. He has a vision for Banaldar where he once worked. It is a beautiful earth-size planet with green hills, rolling seas, and a climate fit for man. After much pleading and begging he manages to raise two thousand mil-pesos from reluctant investors. The auction takes place in Mexico City, capital of the world. However, his hopes and dreams are soon dashed when he is outbid by Morgan, leader of the Free Lives, a group of seven hundred men, women, and children who live the way they were meant to live—naked.

“What are you going to do on Banaldar?” Timothy asked hopelessly.

Morgan turned. “Do? We live naked and eat berries and hunt with stones and clubs. What do you think men are meant to do? Live like this?” He included in an expressive gesture all of the glitter and bustle of the capital. “No. We live in caves and we fill our bellies and breed our children and sleep well at night.” 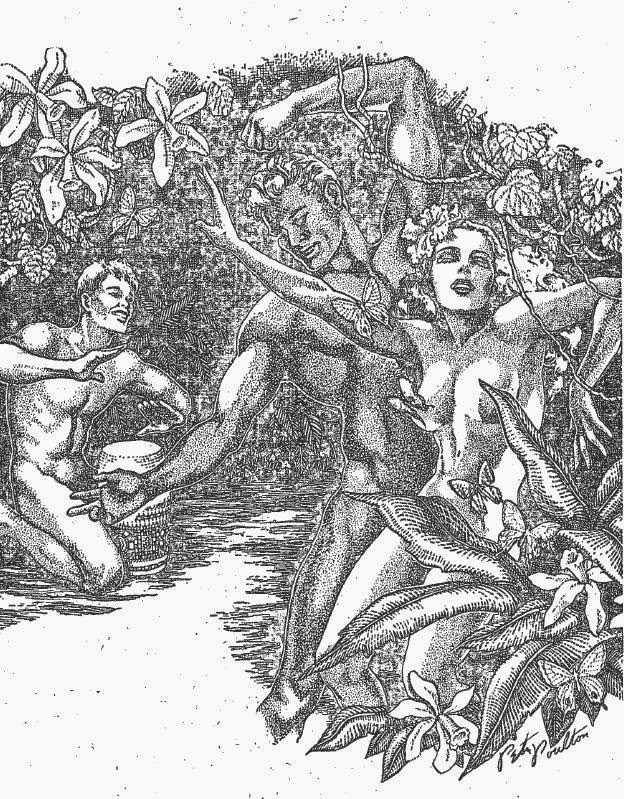 Timothy still has a chance of acquiring his beloved planet. As the second highest bidder he is entitled to the planet if Morgan does not develop or populate it at the end of three years.

The young man has little patience. He takes off for Banaldar almost immediately. When he lands on the planet, he finds it deserted and uninhabited. He searches far and wide but the Free Lives are nowhere to be seen. And then he sees them—hanging in clusters in five-hundred foot giant trees he thought were long dead. The Free Lives have undergone physiological changes. They are like pale fruit. They are white, soft, and bloated. They have green stalks entering the backs of their necks. Their eyes are almost closed and they look deeply contented. They sway helplessly in the breeze.

As Timothy stares in fascination at the new form of the Free Lives, one of the monster trees casts its hypnotic spell on him and begins to nuzzle him at the back of his neck and nibble at it with a million little needle-like teeth.

The White Fruit of Banaldar is traditional science fiction until you come to the end when John D. MacDonald takes you by surprise with an element of horror. I didn’t see it coming but I was a trifle disappointed with the end. As I see it, though, horror is not misplaced in science fiction, especially when you don’t know what’s out there. All in all, a nice little story told in JDM’s inimitable style.
Written by Prashant C. Trikannad at 02:23:00