A musical treat this Tuesday for Overlooked Films, Audio and Video over at Todd Mason's blog Sweet Freedom.

“Do you believe in life after love
I can feel something inside me say
I really don't think you're strong enough, now”

Did you know that released three films in 1987? They were The Witches of Eastwick, based on the novel by John Updike, Suspect, and Moonstruck. Did you also know that the American pop diva has acted in more than a dozen films and television series? I didn’t.

I haven’t seen Suspect which sounds like a good crime thriller with playing a lawyer. Dennis Quaid and Liam Neeson are in the film too.

I liked The Witches of Eastwick mainly on account of Jack Nicholson and Susan Sarandon. The latter with and Michelle Pfeiffer made three fine witches. Moonstruck almost put me to sleep. I prefer Nicholas Cage as a much older actor in his latter films. 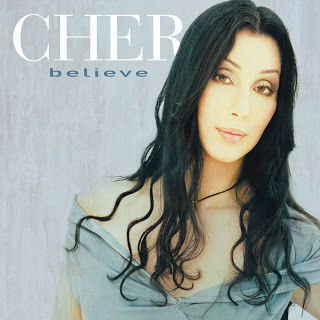 This post is not about Cher the actor but the singer, and that is primarily what she is. A couple of months ago, we were at a mall when her hit single, Believe, played. The song sounded terrific on the hidden loudspeaker system. I wondered where I’d heard it before and then I remembered that I listened to it occasionally on my cellphone. What a difference it made!

I cannot analyse the music behind ’s powerful, manly voice. But, according to Wikimedia, “Believe is a dance-pop song that incorporates elements of techno, Eurodance, and house music. It also uses heavy amounts of Auto-Tune, which has since become one of the song's most notable features.”

Released in October 1998, Believe is the lead single from ’s twenty-third album of the same name and it has become one of the best-selling singles of all time.