How the West Was Written, Vol.1, by Ron Scheer

I was fourteen when my paternal uncle introduced me to my first western, Sudden, by British author Oliver Strange. He used to read the Corgi editions in a single sitting of two hours. By the time I finished reading the ten adventures of the lightning-quick Texas outlaw, and an additional five by compatriot Frederick H. Christian (writer Frederick Nolan), I was hooked to western fiction.

I followed up the Sudden series with westerns by J.T Edson, Zane Grey, Max Brand, George G. Gilman's Edge, Wayne D. Overholser, Giles A. Lutz, and Louis L'Amour whose Flint remains one of my favourite novels in the category.

Over the past three decades, I read many westerns by various authors. I read them without pattern or proper knowledge of the genre. It was only in the past few years, and especially after I started blogging, that I realised there was far more to westerns than gunfights, saloon brawls, and rustling. My understanding of the Wild West has been coming mainly from reading about early and historical frontier fiction on blogs published by veterans in the field, James Reasoner, Ed Gorman, Ron Scheer, and Richard S. Wheeler, among several illustrious writers. Their reviews and articles about western stories in particular and western fiction in general have enhanced my pleasure of reading both early and contemporary westerns. 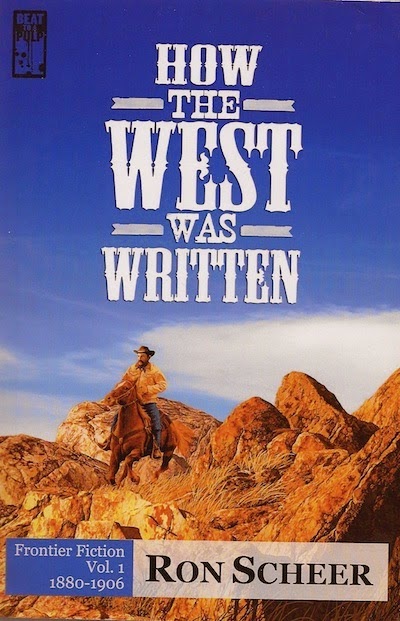 My education in frontier fiction is set to get a boost when I read Ron Scheer's just-released How the West Was Written, Frontier Fiction, Vol.1, 1880-1906. The book—the first of a two-volume series on frontier fiction during 1880-1915—is published by Beat to a Pulp whose editor-publisher David Cranmer describes Ron as "the premier reviewer of Western literature." I couldn't agree more as I'm a lot wiser about the Wild West after reading his many in-depth reviews of western books and films. If you're a fan of westerns, then you should head over to his blog Buddies in the Saddle.

While the title tells you what the book is about, here is a brief description from the introduction:

This book began as a question about the origins of the cowboy western... how it grew from Owen Wister’s bestseller, The Virginian (1902), to Zane Grey’s first novels a decade later. A reading of frontier fiction from that period, however, soon reveals that the cowboy western was only one of many different kinds of stories being set in the West.

Besides novels about ranching and the cattle industry, writers wrote stories about railroads, mining, timber, the military, politics, women’s rights, temperance, law enforcement, engineering projects, homesteaders, detectives, preachers and, of course, Indians, all of it an outpouring between the years 1880–1915. That brief 35-year period extends from the Earp-Clanton gunfight in Tombstone, Arizona, to the start of the First World War.

The chapters of How the West Was Written tell a story of how the western frontier fed the imagination of writers, both men and women. It illustrates how the cowboy is only one small figure in a much larger fictional landscape. There are early frontier novels in which he is the central character, while in others he’s only a two-dimensional, tobacco-chewing caricature, or just an incidental part of the scenery.

A reading of this body of work reveals that the best-remembered novel from that period, The Virginian, is only one among many early western stories. And it was not the first. The western terrain was used to explore ideas already present in other popular fiction—ideas about character, women, romance, villainy, race, and so on. A modern reader of early western fiction discovers that Wister’s novel was part of a flood of creative output. He and, later, Zane Grey were just two of many writers using the frontier as a setting for telling the human story.

How the West Was Written promises to be the literary equivalent of the epic film How the West Was Won, 1962. The book is currently available as an ebook for Kindle and in paperback. Ron Scheer says there will be a second volume for the years 1907-1915.
Written by Prashant C. Trikannad at 02:46:00