The Trojan Horse by Hammond Innes (1940)

This week Evan Lewis at Davy Crockett's Almanack of Mystery, Adventure and the Wild West is doing the Friday’s Forgotten Books honours usually handled by Patti Abbott at Pattinase or Todd Mason at Sweet Freedom.

There are two kinds of WWII stories: those about the actual war between the Allies and Germany and those revolving around it. The Trojan Horse falls in the second category and, while it does so, its outcome—were it to succeed—would have been no less significant than an open conflict on the battlefield.

In his fifth novel, British author Hammond Innes creates a peripheral war that is as frightening as the real thing.

Franz Schmidt is a shabby old Austrian Jew and a brilliant engineer. He discovers a special light alloy and decides to build a prototype of a new diesel engine that will give any air force vast superiority in the air and a sure-fire way to win the war.

When Hitler invades Austria, Schmidt flees to England on a false passport and with the engine design in his head.

In England, Schmidt lives with his dead wife’s family at Swansea, Wales. His brother-in-law Evan Llewellin, an undercover British agent, offers him money and a workshop where he builds his diesel engine. What he does not know is that the Nazis are already hot on his trail. Llewellin is killed and Schmidt is framed for the brutal crime. 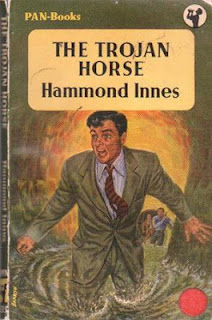 On the run from Scotland Yard, Schmidt approaches Andrew Kilmartin, a famous criminal lawyer of London, and pleads for help. The 42-year old barrister is initially reluctant to believe Schmidt’s story till he reads about Llewellin’s murder in the papers. He decides to defend Schmidt but the old man vanishes without a trace.

This is where the story begins.

Kilmartin is a combination of a legal eagle and a private eye—his sense of justice evenly matched by his thirst for reckless adventure. With nothing more than a mysterious sealed envelope left with him by Schmidt, the attorney starts investigating the engineer's disappearance and his fantastic claim that the Nazis are after his invention.

Over the next 100-odd pages Kilmartin, with the help of his close friend and studio photographer David Shiel, unearths a sinister conspiracy involving a powerful banker and shadow minister, Baron Ferdinand Marburg, who connives with the Nazi-controlled Calboyds Diesel Company to steal Schmidt’s diesel engine from under the nose of the British government. He also meets Schmidt’s beautiful daughter Freya, also an engineer, and falls in love with her. The novel ends in a high-octane drama on the high seas.

The Trojan Horse is a page-turner in spite of the author’s obsession with the details. In fact, it is the details that make this 190-page thriller gripping.

For instance, in a 19-page chapter titled Lead on, Sewer Rat, Hammond Innes takes you through London’s filthy rat-infested underground sewer system that Kilmartin uses to escape from the vault of Marburg’s bank where he has been imprisoned by Nazi gangster Max Sedel. Just before that, the attorney has spent agonising hours lying in a foetal position in a deed-box that nearly becomes his coffin.

The author’s description of Andrew Kilmartin’s claustrophobic and nauseating experience, with Nazi agents in hot pursuit, is so vivid as to make the reader relive it. The book owes its unsparing details to the author’s proclivity for six months of travel and research and six months of writing.

The conspiratorial and anti-establishment tone of the novel, with its Nazi sympathisers and collaborators in Britain (and in America), is reminiscent of many fictional and non-fictional books that came out during and after World War II. Hammond Innes, an ex-artillery major and a yachtsman, gives the reader an unusual insight into one such anti-national plot which, in real time, could have had serious implications for Britain's war against Germany. 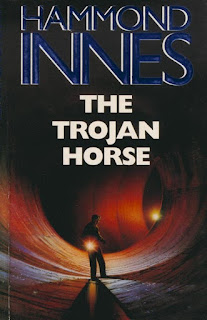 “Once I nearly panicked. Only the dial of my wrist-watch saved me. It was a friendly face and gave me courage.”

Hammond Innes, author of some thirty novels, has a clean and imaginative style of writing. He does not confuse you with too many characters. The main ones have names and faces, the rest are nondescript. The emphasis is on the plot and suspense on every page. It builds up slowly and, like a locomotive, gathers speed and then races towards the climax, one that I did not quite anticipate.
Written by Prashant C. Trikannad at 03:46:00