The Hardy Boys are back!

Okay, this is off the top of my head. No Google, no Archive, no Wikipedia...

Chet Morton, Biff Hooper, Phil Cohen, Tony Prito, and Jerry Gilroy are friends of Frank and Joe Hardy, teenage brothers and amateur detectives of Bayport, a fictional town in the US. They assist their father, private investigator Fenton Hardy, solve many of his cases, though most of the time they are sniffing out their own mysteries and doing a good job cracking them, often with the help of their friends.

In the books I read, then, Frank is 18 and Joe is 17 and their girlfriends are Callie Shaw and Iola Morton. Iola is best friend Chet’s younger sister. Fat Chet is to Frank and Joe what skinny Jughead is to Archie, loyal and always hungry. Like Jug, he loves food. He usually carries a weighty snack and is acutely nervous when he tags along with the brothers to find out whodunit. The boys stick their necks out and get into trouble. They always solve their cases and make their father and the Bayport police department proud. 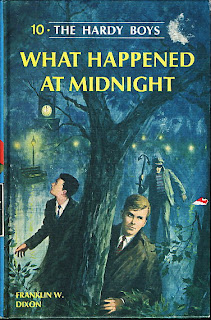 Fenton Hardy wears a felt hat and a suit. He is a devoted husband and a caring father. I picture Raymond Burr, in his younger days, or Humphrey Bogart in the sleuth’s role. His wife, Laura Hardy, is a housewife and has a supportive role in the mystery stories. Frank and Joe have to take their permission to work on cases during school days, and even on holidays. Their cases frequently take them away from home. There is talk of finishing homework too. They are obedient boys. You really can’t miss the morals behind the stories.

I read the Hardy Boys in school, from the age of nine onward. I read over a hundred of the thick blue-spine hardbacks that had readable titles like The Twisted Claw, The Phantom Freighter, The Wailing Siren Mystery, The Sting of the Scorpion, and The Infinity Clue. The big typeface against the stark white page was easy on the eyes. The covers had striking colour illustrations usually depicting one of the key scenes from the story within. There were other early editions too but I don't remember reading any. 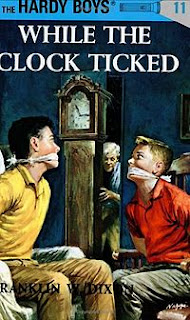 We were a bunch of friends who borrowed a Hardy Boys mystery a day from the local circulating library and took turns reading it, each having an hour or so before passing it on to the next impatient boy in the queue. We used a similar modus operandi to read Commando comics.

The Hardy Boys series were highly appealing to young and impressionable readers. Frank and Joe Hardy inspired young boys like me to become detectives when we grew up. For some reason, the army was another thrilling option. Neither came true in my case.

For years I thought Franklin W. Dixon was a real writer. He turned out to be one ghostwriter too many. Like the group of writers behind Carolyn Keene who wrote the Nancy Drew mysteries. The boys and the girl were created by Edward Stratemeyer who founded the Stratemeyer Syndicate, a book-packaging enterprise (now that little bit I got from Wiki). 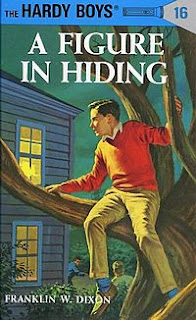 Since the 1980s both the YA series went through a lot of changes. The Hardy Boys were reinvented as the Hardy Boys Casefiles which, I suspect, might have been kept away from young teens because of their “adult” content, meaning a fair dose of murder and violence. Later, the Hardy Boys and Nancy Drew were brought together in a combined series. By then, however, the series had lost its originality, and I, my interest. There were some film adaptations too. I haven’t seen any.

Now the original Hardy Boys and Nancy Drew series are back, in small, compact, hardback reprints with their original cover design intact. They adorn the YA shelves in new bookstores in Mumbai. I scan the familiar titles and hold a few of the books, for old times’ sake, and I am happy that they still hold. One of these days, I am going to read a few of the books that first cultivated my reading habit. 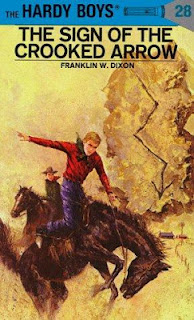