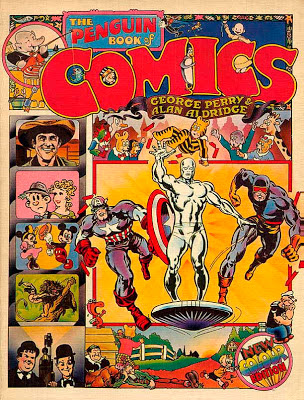 I can recollect every single comic book I have purchased over more than three decades. Some more than others because those are the ones I am especially fond of. I had to wait a long time before acquiring them. Collecting comics is like collecting stamps: you have to be patient. You don’t have to find them, they will find you.

For a long time, I wanted to own The Penguin Book of Comics that I had heard so much about. If I wanted to, I could have arranged for the purchase of the volume. I didn't because I knew it was waiting for me, somewhere, not very far from home. And it was, one day, under a dusty and used pile of books and magazines on a footpath in downtown Mumbai, once famous for secondhand books. I bent down and picked up one of the finest specimens of used comic books I had ever come across. It cost me only Rs.100 ($2). A good number of years had passed between my desire to own the book and the time I actually owned it, but it was worth the long wait.

Published in 1967 by Penguin Books, the 272-page soft volume was the most creative, imaginative, and authoritative chronicle of British and American comic books of its time. Forty-five years and countless number of comics and compendiums later, this Penguin continues to hold its head high. The “slight history” of comic books has been devised by two Englishmen: writer and editor George Perry who wrote the text and artist and graphic designer Alan Aldrige who did the amazing cover art and illustrations.

The Penguin Book of Comics begins with a fine essay on the evolution of comics from the Paleolithic or stone age and what they can give us, looks at the tradition in Britain and the revolution in America, analyses the rise and fall of comics in the mid-20th century in context of Dr. Frederic Wertham’s damning thesis and the comics code, and the influence of comic strips and comic books on other popular culture and entertainment like art, films, and television.

The essays are interspersed with hundreds of images and illustrations starting with the first known pictures by man some 30,000 years ago to all the comic-strips, illustrated newspapers and magazines, and comic-books known to you and me, right up to 1967. I don’t think the authors left out even a single picture or comic-strip between the two extremities of time. Immense study and research has gone into the making of this book.

If I were to mention some of the comic strips and comic books, I wouldn't know where to begin or when to stop. Nonetheless, I will refer to some of the rare and forgotten ones, such as, The Yellow Kid, Katzenjammers, Alphonse and Gaston, Happy Hooligan, The Two Pickles, Chuckles, The Funny Wonder, The Firefly, Dan Dare: Pilot of the Future, Chips, Thunderbirds, Puck, Buster Brown, Pogo, Krazy Kat, Barney Google, Gasoline Alley, Tillie the Toiler, Betty Boop, Prince Valiant, Terry and the Pirates, Steve Canyon, Skippy, Jane’s Journal, Buck Ryan, Flook, Tiffany Jones, and Male Call. Ring bells?

Every one of these comic strips and comic books were created before my time and yet I can identify with many of them, thanks in part to my enthusiasm for this delightful medium and in main to copyright-free content on the internet. The Penguin Book of Comics is an absolute must for any comics buff. You won’t find a better comic book encyclopedia. I started this post by recalling how I came to possess a near-mint copy of this book and I will end it by recounting a similar experience with another book—the 256-page hardback DC Comics: Sixty Years of the World's Favourite Comic Book Heroes (Bulfinch, October 1995) by the late Les Daniels, a renowned historian of comic books.

Some years ago, I discovered the DC book in a swanky new bookstore, selling at a discounted price of Rs.450 ($9). I resisted the urge to buy it mainly because I could put the money to better use. Two months later, I bought it from a roadside seller not far from where I had purchased The Penguin Book of Comics, for Rs.125 ($2.5) and in mint condition.
Written by Prashant C. Trikannad at 02:56:00