“So far I have published a cosy mystery in English, but though they are fun to read and write, I prefer crime fiction which is a bit more serious so the next one will be a psychological mystery,” Dorte Hummelshøj Jakobsen, a Danish teacher and crime-fiction writer, told fellow author Linda Rae Blair in an interview on Linda's blog earlier this year. 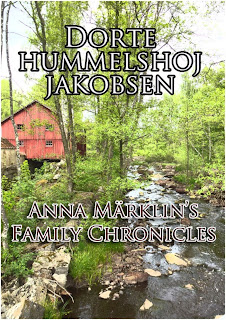 In Dorte’s words, “Anna Märklin’s Family Chronicles is the story of a young Danish woman, whose life is in a rut. Anna Storm is unemployed, her father is seriously ill, and her best friend and neighbour receives mysterious threats. Anna is a very ordinary antihero, so even when her friend dies unexpectedly, she keeps burying her head in the sand.

“Then she finds her Swedish grandmother's old notesbooks, however. Anna is spellbound by the beautiful drawings and the sweet story of her grandmother's everyday life. Finally, she has found a worthy project to engage in. As she reads her grandmother's words, it dawns on her that the books are not suitable for children at all, but that the sinister story which is hidden between the lines may give Anna a much needed push. Anna wakes up—but is it too late?

“For readers of my Knavesborough series: please note that this book is not a cosy mystery, and I do not recommend it for children.”

Dorte has a broad taste in crime, from the traditional and historical to police procedural and amateur detectives. “When I write crime, I also stick to the soft or middle part of the spectrum so you won't see hard-boiled or noir fiction from my hand,” she told this blog in an email. “Besides, the environment and the characters are as important to me as the suspense, and I don't care much for Hemingway's taciturn heroes.”

By Knavesborough series, Dorte—who reads and writes crime fiction in English and Danish in her spare time—is referring to her stories based in the fictional village of Knavesborough and revolving around constable Archibald Penrose and his fiancé, the librarian Rhapsody Gershwin, who feature in her most popular story The Cosy Knave, a humourous mystery set in Yorkshire. 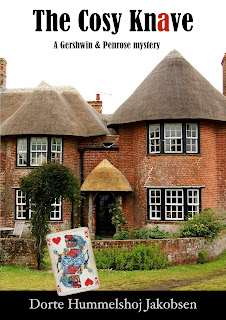 In The Cosy Knave, also published as Murder deLight, “The vicious attacks begin when the prodigal son of Knavesborough returns to the sleepy village after forty years in Argentina with fame and fortune. No wonder that spiteful Rose Walnut-Whip is killed, but when the violence escalates, Constable Penrose knows he needs help from his fiancée, librarian Rhapsody Gershwin.”

Other Penrose and Gershwin mysteries include The Charity Shop, a humourous short story of crime and suspense, and Christmas in Knavesborough, which features four Christmas crime stories. Two of these stories also appear in her collection Candied Crime, in turn a collection of 13 humourous flash fiction stories. There is also Liquorice Twists, another compendium of 20 flash fiction stories that Dorte says are “a bit darker.”

There’s more from Dorte: in the four crime stories in The Red Shoes, she promises “high level of toxic humour and loose limbs (including tongues in cheeks).”

Her bestseller is the romantic ghost story Heather Farm, a suspense plus romance in the Dunes near the Danish west coast.

The range and variety of Dorte Hummelshøj Jakobsen’s fiction will delight readers, both young and old, and you will find them all at Smashwords and Amazon. You can also read her insightful interview with author Linda Rae Blair here.
Written by Prashant C. Trikannad at 09:34:00