This review of Operation: Daybreak is my contribution to Tuesday’s Overlooked/Forgotten films and television over at Todd Mason’s blog Sweet Freedom. Don't forget to check out the other fascinating reviews over there. 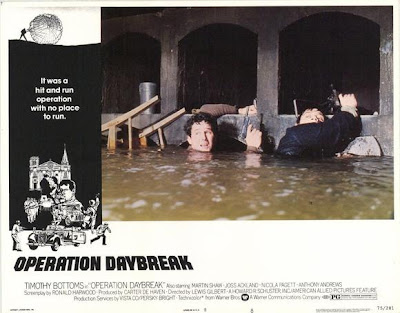 On June 22, Yvette Banek wrote a stirring piece on the award-winning film Brokeback Mountain at her blog In So Many Words… (click on the link to read it). In my brief appreciation of her article, I mentioned that the real story lay in the tragic end. This got me thinking about other films where two men are caught in a similarly poignant and hopeless situation towards the end, though, under vastly different circumstances.

Both films end in tragedies but not before entertaining the viewers sufficiently through the better part of their nearly two-hour length. The final scenes in the two films are stamped on our minds — Cassidy and the Kid running out of the house with their guns blazing and Kubis and Gabcík turning their guns on each other in a suicidal embrace.

Of the two films, Butch Cassidy and the Sundance Kid is decidedly more glamourous, as is the case with nearly everything about the Wild West, at least in books and films. Newman and Redford only add to the glamour quotient.

There is seldom an aura to war films which are entertaining in their own way, albeit in the shadow of the grim and frightening realities of war and conflict and their bloody aftermath.

Operation: Daybreak is the kind of war film you’ll marvel at, because of the way it is made — a true story in the chilling backdrop of the Nazi regime and World War II. Hitler has occupied Czechoslovakia and a squad of recklessly brave resistance fighters is trained by British Special Operations Forces and airdropped into Prague to eliminate SS General Reinhard Heydrich (Anton Diffring), the very evil Reich Protector — known to the world as The Hangman and The Butcher of Prague.

In the film, shot on location in Prague, Kubis (Bottoms) and Gabcík (Andrews) ambush Heydrich but fail to kill him the first time. The underground fighters, however, regroup and succeed in their second attempt though not without hiccoughs. If my memory serves me correctly (I saw this film only once, in early 1980), the duo miss their target and a grenade tossed by Kubis in a last-ditch effort falls short of Heydrich but the resultant explosion injures him grievously and he dies a few days later.

This is exactly what happened to Reinhard Heydrich in real life: he was killed in a secret Allied mission known as Operation Anthropoid.


For me, Operation: Daybreak is not about the plot to kill the Nazi maniac or the brutal reprisals that followed the deed but the courage of two young men who, holed up in the underground loft of a building, decide to kill each other rather than fall to a hail of bullets from hundreds of Jerries advancing upon their position. 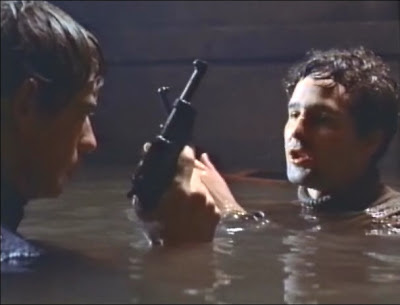 When the German soldiers start flooding the basement with water, in a final attempt to flush out the Czech fighters, Sergeants Kubis and Gabcík realise they are doomed. Standing in neck-deep water, they take out their revolvers, point them at each other’s head and fire, point blank. The final scene has stayed with me since the first and only time I saw it. I don’t remember Anthony Andrews much but I do remember the look on Timothy Bottoms’ face as he pulls the trigger in that emotionally charged scene.

Now thirty years is a very long time and it’s possible I've been sketchy with the facts, so I invite readers to correct me and set them right. 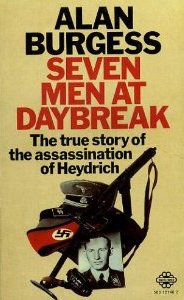 Operation: Daybreak, one of the great war movies to be made, is directed by Lewis Gilbert known for his James Bond flicks You Only Live Twice, The Spy Who Loved Me and Moonraker, and is based on the book Seven Men at Daybreak by English author Alan Burgess. Americans watched the film as The Price of Freedom.