This book review is offered as part of Friday’s Forgotten Books meme over at Patti Abbott’s blog Pattinase. Hop over and check out the eclectic mix of reviews by other bloggers. It will be worth your while.

A Fine Night for Dying, in spite of the arresting title, is not one of the best novels of British author Harry Patterson who wrote it in 1969 under his most famous pseudonym, Jack Higgins. The story is predictable, the plot is hackneyed, and the secondary characters are uninteresting. But then, it’s a Jack Higgins and if you are a fan of his, like I am, then you overlook the negative aspects and enjoy the novel, as I do.

Not every Jack Higgins novel can be like The Eagle Has Landed or The Last Place God Made or The Savage Day or Storm Warning or A Prayer for the Dying. If you’d like to dig into Higgins, these are some of the novels you ought to read. 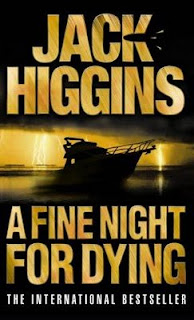 In A Fine Night for Dying, Jack Higgins resurrects Paul Chavasse in his sixth and final avatar as special agent for the Bureau, the little-known branch of British Intelligence that handles all the delicate assignments, read dirty work.

Chavasse, a master of languages (he even knows Urdu), must investigate the cold-blooded murder of Harvey Preston from Jamaica. The body of the former Royal Army Service Corps officer turned black marketer and smuggler is washed up ashore on the English side of the Channel, with seventy pounds of chain wrapped around him. As Chavasse discovers later, Preston was alive when his enemies drowned him. A horrible way to die.

The trail leads Chavasse to a passage-by-night racket where illegal immigrants from all over the world are promised safe passage across the Channel in the dead of night, except they all turn up dead before they can set eyes on the English coast. And eventually to the brain behind the shady business, Leonard Rossiter, a Jesuit priest who lost his faith during his incarceration and subsequent indoctrination by the Chinese during the Korean War. A man with a “tortured, aesthetic face” who couldn’t possibly be the murderer of innocents and yet that’s what he is.

However, Rossiter, himself, is a pawn in the hands of the Chinese who have few friends and allies on the continent and use his second-rate organisation to run the immigration racket and advance their political goals. 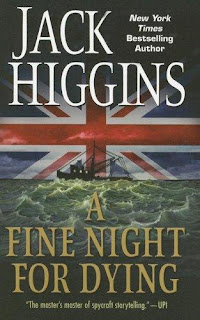 Predictably, Chavasse, the agent with a heart (as all Jack Higgins’ agents are), goes out of his way to help the mostly poor and unsuspecting immigrants, including an Indian girl who falls for Rossiter, and on a couple of occasions lets his guard down, enough to allow his enemies to capture him. In the end Chavasse, with a lot of help from the revenge-seeking Darcy Preston, Harvey’s brother, hunts down Rossiter and kills him.

A Fine Night for Dying is a mediocre thriller because there are too many gaps in the story. For instance, Chavasse’s trail leads him directly to millionaire Enrico Montefiore, a recluse who hides on his island stronghold, at least that’s what the blurb on the back cover tells us. Inside, Montefiore has been driven to drugs by Rossiter who is after his wealth. Montefiore, himself, has very little role in the story, save for begging Rossiter for his lethal dose. If the blurb is meant to sell the book to the reader, it doesn’t.

Jack Higgins’ heroes (there are at least seven of them, Liam Devlin and Sean Dillon being the more popular ones) are a lot like Mack Bolan, the Executioner — they rarely come to harm and when they do, they manage to get out of the most difficult situations. It’s a miracle they live to tell another story. All said and done, Jack Higgins is a pure entertainer — treat him as such.

Note: I gave Jack Higgins’ The Keys of Hell, another Paul Chavasse adventure, a more or less similar verdict. You can read it here.
Written by Prashant C. Trikannad at 13:40:00