The Spike by Arnaud de Borchgrave and Robert Moss

In my last post I reviewed Tom Rachman’s impressive debut novel The Imperfectionists which is about journalists working for an international newspaper based in Rome.

The novel got me thinking about other books written by well-known journalists, such as Without Fear or Favor: The New York Times and Its Times (1980) by Harrison Salisbury, which I have read, and All the President’s Men (1974) by Carl Bernstein and Bob Woodward, which I have been planning to read.

Thanks to Ron Scheer of Buddies in the Saddle for reminding me about Bernstein’s and Woodward’s investigative reporting on the Watergate scandal for The Washington Post. In 1976, it was made into a film by Alan J. Pakula (Presumed Innocent, Sophie's Choice, The Pelican Brief) and had Dustin Hoffman and Robert Redford in the two lead roles. I haven’t seen the movie either. 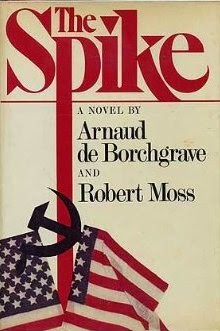 When I entered journalism by a quirk of fate, in the mid-eighties, the first book that was thrust into my hands was The Spike (1980), a trailblazing spy thriller written by two other American journalists, Arnaud de Borchgrave and Robert Moss. It is built on the experiences of both the authors.

“This is the book every budding reporter should read. It will inspire you,” I was told. The Spike did inspire me but it didn’t take me as far as it takes young Bob Hockney in his journalistic career.

As far as I remember, Hockney is opportunistic and learns the ropes quickly as he graduates from a plain cub reporter to a globetrotting investigative reporter who gets hold of a scoop of a lifetime—involving a KGB plot, western media, sex, and blackmail. There is just one hitch: Hockney’s exclusive despatches are spiked by his editor.

In journalistic parlance, “spike” literally means to kill a story.

In my very first job as a reporter, I remember the copy desk had a wooden block with three iron spikes sticking out of it. It was used to actually spike copies filed by reporters and received from wire services; stories that would not make it into next morning’s newspaper. The devils on the copy desk loved using it; sometimes, I suspect, to show a reporter who was boss. Reporters filed stories in earnest, copy editors killed them in right earnest. It was discouraging.

The Spike was my first exposure to a fictional account of the world of newspapers. It was racy and gripping. Read the book if you haven’t. You won’t regret it.
Written by Prashant C. Trikannad at 09:55:00